Uber has announced its latest innovation -- a multi-person, ride-sharing scheme that picks up and drops off passengers along a pre-determined route. It sounds like a bus – and it is a bus. Right now limited to a maximum of 5 riders, but what will the future bring?

Known officially as UberHOP, the idea supposedly blends a traditional wait-and-ride bus service with some of the on-demand convenience of Uber. Users will be paired with a driver and other commuters going in the same direction, and then be directed to a pick-up location. Once there the driver will load up with the commuters, and drop them off at a "pre-destined" stop, "so you can walk the last few blocks to work".
The de facto busses run "during commuting hours" as part of a pilot scheme. Uber says the service is designed not to replace mass transit, but to augment it "at no extra cost".
"Investment in mass transit is an important part of the solution. But it's expensive and not everyone lives within walking distance of the subway or a bus stop. Uber helps use today's existing infrastructure more efficiently at no extra cost," the company wrote in a blog post.
"Today, 76 percent of commuters in the US drive to work by themselves. If they could easily share the trip (and the cost) with one or more fellow commuters that would dramatically cut congestion, improving everyone’s quality of life." 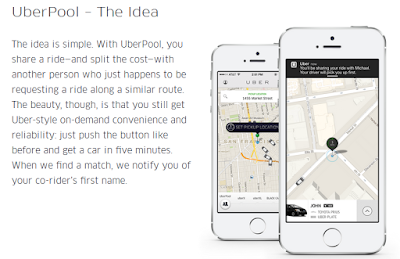 Uber already has several other ride-sharing services, including UberPOOL, launched in London, which allows users to share rides with each other.
The company also announced a second pilot scheme, this time in Chicago, for "uberCOMMUTE", a program for drivers who want to recoup the cost of their commute by sharing the trip. Available between 6am and 10pm in Chicago, anyone with a car will be able to take part if they give Uber access to their driving record and identity.

Uber said it had been inspired by the success of BlaBlaCar in Europe (named one of the continent's hottest startups by WIRED) but claimed it could make the process "more convenient, more reliable and safer" than competitors. "By making it easy and affordable for people to share rides, we can get more people into fewer cars," the company explained.