Virgin Trains has unveiled the first of its new fleet of trains in a ceremony at King’s Cross attended by Sir Richard Branson. Set to revolutionise travel on the East Coast from 2018, the Virgin Azuma will be one of the most advanced trains on the UK’s rail network. 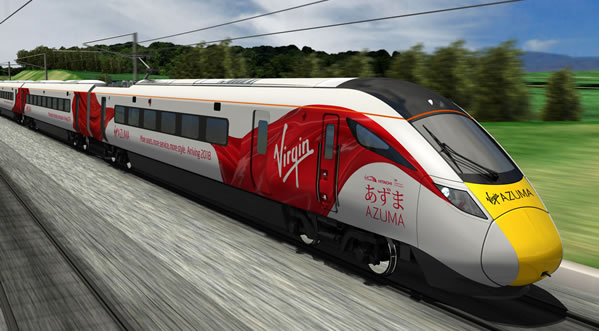 Literally translated as “East” in Japanese, the Virgin Azuma pays homage to the new train’s lineage and to the East Coast route. With 65 trains providing an extra 12,200 seats for a new and expanded timetable, the fleet of Virgin Azumas will increase capacity into King’s Cross by 28 per cent during peak time.
Whilst the trains will initially reach speeds of up to 125mph, Virgin Trains has today announced the creation of a cross-industry working group, including Network Rail, to investigate the potential for the East Coast route to enable their operation at 140mph.
Secretary of State for Transport, Patrick McLoughlin, said: “The state-of-the-art Intercity Express trains heading to Virgin will transform rail travel for passengers between London, the north east and Scotland. These new trains, combined with Virgin’s exciting plans for the franchise, will provide more services, more seats, and faster journeys, helping to place passengers at the heart of the railway.”

Sir Richard Branson, founder of the Virgin Group, said, “This is a hugely important moment for passengers on the East Coast. A line which has witnessed the historic Flying Scotsman and Mallard will now see passenger services transformed with the UK’s most advanced long distance trains. Our customers on the West Coast have already seen what Virgin can bring to train travel and how the Pendolinos have made a huge  difference to speed and comfort. Our new fleet of Azumas will bring a similar transformation to the East Coast, and propel one of the UK’s most prestigious lines into the 21st century.”

The new trains will also have: