The TransPennine Express franchise (TPE), operated by FirstGroup, took over the reins of intercity rail operations in the North and Scotland on 1st April. Over the next seven years TPE will oversee an investment of more than £500m which will transform rail services across the North of England and Scotland. This investment will lead to an 80 per cent rise in capacity at the busiest times of the day and increase connections between the largest cities in the North and Scotland by 55 per cent by 2019.
220 brand new carriages will be introduced by 2020, providing an additional 13m seats a year. These state of the art trains, all with capabilities of going 125 mph, will be more reliable with more seats and luggage space, with the first new trains to be delivered by Spring 2018. Journey times will be reduced as the benefits of these new high speed trains and the Government’s investment in electrification is realised. The remaining carriages will undergo a £20-million-plus refurbishment scheme to bring them up to the same standard.

During the franchise TPE will introduce a timetable that gives the same level of service at weekends as on weekdays, reflecting the changing nature of work and leisure travel needs. Pioneering fares will be introduced, including half price travel for jobseekers and 16-18 year olds, as well as further discounted travel for groups.
TPE will  now run 19 of the region’s railway stations and will invest more than £18m to further develop these transport hubs. Customer information at stations and via websites and mobile apps will be improved.

“This new franchise will lead to a complete overhaul of train travel in the North and Scotland. Over the next four years the customer experience on our services will be reimagined with improved catering, more seats, faster trains, innovative ticketing systems and improved journey times.

“While some things will take time to implement, customers will notice some changes immediately. The catering across our services will begin to improve from today, while the refurbishment of our Class 185 rolling stock will start later this year. We are also committed to improving our response to delays and cancellations, with an automatic delay repay system implemented within 12 months and Wi-Fi at all TPE stations in 2017.

“We will be working hard over the next four years to achieve these major changes and create an outstanding intercity rail service that will take the North further.”

The franchise change over follows the December announcement from the Department for Transport that FirstGroup would take full ownership of the operator until at least 2023. FirstGroup operated the previous franchise as majority partner with Keolis from 2004, increasing passenger numbers from 13m to 29m in that time. As sole operator of the new franchise FirstGroup will continue that success. 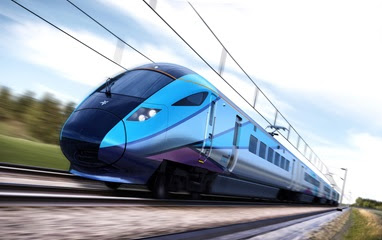 The contract, for the fleet of AT300 ‘Inter City’ trains is the first to be finalised by TransPennine Express. The deal, which has been financed by Angel Trains, will lead to the procurement of 19 five-car Hitachi AT300 bi-mode trains, capable of operating on both electric power and diesel power.