A COUPLE'S bid to prove that the signage for a controversial Glasgow bus gate is illegal has been dealt a blow after it emerged that the council will try to have the case thrown out of court.
Dawn and Geoffrey Bonelle, from Livingston, have been embroiled in a long-running battle to overturn a fine issued when their family car was snapped passing through the bus gate at Nelson Mandela Place in October 2014, and are finally due to appear at Glasgow Sheriff Court on May 20. 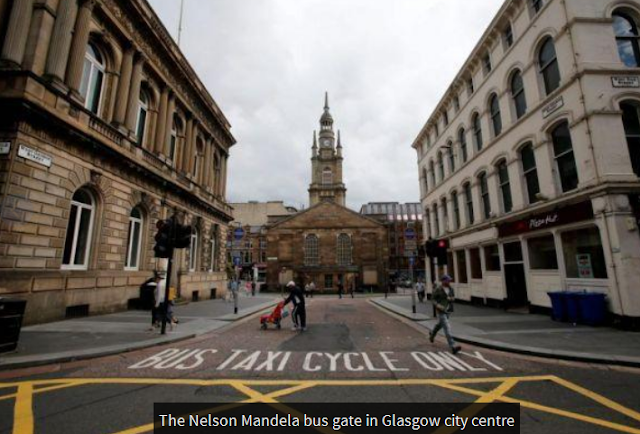 The couple maintain that the bus gate signage was not prominent enough and, if successful, their case would open the floodgates for thousands of other motorists to attempt to claw back fines.

However, lawyers for Glasgow City Council have now indicated that they plan to challenge the jurisdiction of the court to rule on the case.
If upheld, the Bonelles admit they could not afford to pursue the case in a higher court or seek a judicial review.
Mrs Bonelle, 57, said: "There's no way we've got the money for that, but I think that's why they're doing it.
"Apparently it's a tactic used quite a lot by councils and the NHS to stop the man on the street, so to speak, making them give up because they can't afford to go any further.
"We are hoping that the Sheriff sees through their bullying."
The saga began when Mr Bonelle, a Citizens Advice volunteer, drove through the Nelson Mandela bus gate on October 7 2014 while visiting Glasgow for a training seminar.
He insists that the signage was unclear and obscured by parked vehicles and traffic lights, so refused to pay the £60 fixed penalty notice.
The Bonelles say the council thwarted their attempt to challenge the fine by failing to provide an application form for the Scottish Parking Appeals Service, despite repeated requests. They are now out of time.
The council deny the claim and insist that all paperwork is "accounted for".
In December 2015, the dispute came to a head when debt collectors acting on behalf of Glasgow City Council arrived at the couple's home with an arrestment order authorising them to seize the Bonelles' £5000 family car in lieu of the unpaid fine, which had ballooned to £274 due to late payment charges and the cost of dispatching the Sheriff's officers.
The arrestment order was dropped after the Herald reported on the case, but the Bonelles paid the fine and subsequently launched legal proceedings in an attempt to recoup the cash through the small claims court in Glasgow.
Mrs Bonelle said the case was "not about the money", but simply holding the council to account.
She said: "The chap at the civil court said to me: 'I think the council are a wee bit worried that you'll open a can of worms'. I think he's right."
In 2014, York City Council was ordered to pay back £1.8 million to motorists fined for driving over Lendal Bridge after an independent traffic review ruled that the bus lane was unlawful.
The same year, Birmingham City Council cancelled 18,000 bus lane fines after a tribunal ruled that signage was "confusing and unclear" following hundreds of complaints from drivers.
In September 2014, Glasgow City Council conceded that the number of transgressions at the Nelson Mandela bus gate was "unusually high" after it generated £800,000-worth of fines in its first two months, and transport bosses said they would look at improving the signage.
However, they stress it has always met legal requirements.
A spokeswoman for Glasgow City Council said: “It would be inappropriate to comment however there is an established procedure in place for appealing against a penalty charge notice.”