TRAINS stopped in a North-East village for the first time in 50 years on Easter Sunday.
The Weardale Railway Heritage Service Ltd has extended its Stanhope to Wolsingham service to Witton-le-Wear, in County Durham, to run on selected Sundays throughout the summer.
Several years ago, Witton-le-Wear Parish Council funded half of the cost of replacing the station platform, but the decking was not made of durable enough material and it wasted away.

The old decking was replaced recently and volunteers spruced up the station with banners, bunting and a Witton-le-Wear sign made from stones. 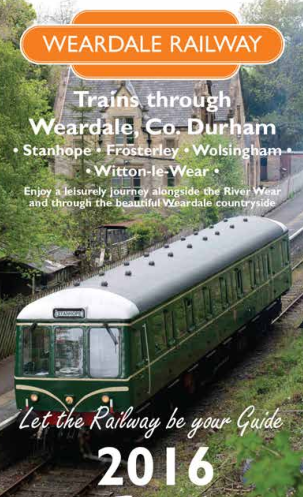 Three services called at the station on Sunday, with the first one arriving on time at 11.15am.
Volunteer John Hill, from the Heritage Service, who manned the crossing at Witton-le-Wear throughout the day, said: “It has been an excellent day and very well supported.
“There were quite a few people waiting for the first train and a lot were already on board.
“Everybody has been very enthusiastic and we have had a lot of comments saying how good it was.
“I think local people feel like they are being thought of at last and this is something that they want. It’s magnificent.”
The next service is due to run next Sunday and will run roughly every fortnight.
The railway operates from Stanhope, to Frosterley, Wolsingham and Witton-le-Wear, before returning to Stanhope via the same route.
The track is owned by the Weardale Railway Trust and volunteers re-started the heritage service in 2014.
It had been cancelled in 2012 after being deemed as not financially viable.
Passengers travel on a 60-seater, 1958-built class 122 Bubble Car and for the past two seasons, the service has carried about 10,000 passengers.

Share article
On the days when the train goes to Witton-le-Wear there will be fewer services operating because the journey takes twice as long.