Thousands of rail enthusiasts descended on a railway depot in Bristol recently to celebrate 40 years of the High Speed Train and taking centre stage was the man who designed it.
Sir Kenneth Grange was at St Philip's Marsh depot to unveil a power car named after him and painted in the train's original yellow, blue and grey livery.
More than 3,500 people bought tickets to the event to see Sir Kenneth, whose designs also include the first parking meters, food mixers and the Kodak Instamatic camera. 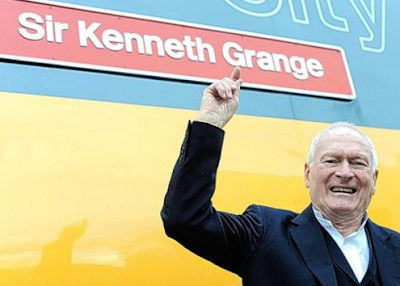 The 86-year-old designer said: "I am thrilled and absolutely honoured to be here."
"I started work in railways in the 1950s, back when I was a young designers. Many of those before me were giving the young designers a chance to shine.
"I was very lucky to be part of that group, and thankful. It is a wonderful industry to be involved with."
Speaking of having a locomotive named after him he said: "It doesn't happen to many people, and when it does, you are unprepared for the emotions that floods through."

It was one of six High Speed Trains lined up at St Philip's Marsh depot which itself is celebrating its 40th anniversary.
They included the restored High Speed Train prototype which set the world speed record for a diesel at 143 mph in May 1973. It was later beaten when another InterCity 125 touched 148 mph on November 1, 1987
When Inter City High Speed Trains first entered regular service on October 4, 1976, they were nicknamed the Flying Bananas because they were lightning quick and painted bright yellow at either end. 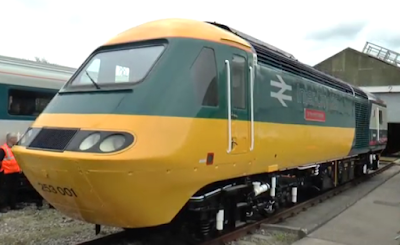 They looked and sounded revolutionary with their aerodynamic shape and their screeching turbo-charged diesel engines. Since then they have made 100 mph plus journeys to and from London Paddington day in day out.
High Speed Trains have become widely recognised as the most successful trains this country has ever produced.
They were meant only to be a stop gap, intended to last about a decade until a more advanced train came into service or until the line between the West and London was electrified.
But it is likely to be another couple of years before new trains appear and the electrification of the line complete. InterCity 125's as they have been known have always performed beyond expectations. On its first full day in service the inaugural High Speed Train completed the 117 mile journey to Paddington three minutes early.
Bristol's St Philip's depot was built to maintain the fleet of trains and can hold four complete High Speed Trains at once. 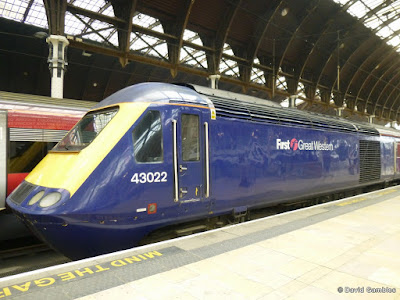 Today Great Western Railway's High Speed Trains still clock up 1,000 miles a day running between London Paddington and Penzance and into South Wales. The company is currently repainting them in its new dark green and grey livery, their final guise for this part of the world.
But when they are replaced with new Japanese electric trains a number of them are destined not for retirement or the scrapyard but for a transfer to Scotland and yet another lease of life.