The Bedford – Sandy – Cambridge corridor has been announced as the preferred option for the Central Section of East West Rail. 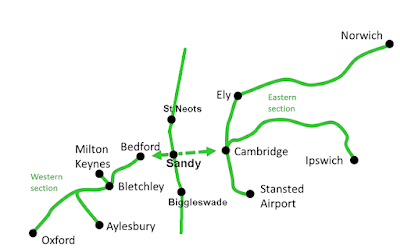 East West Rail aims to improve the east-west connectivity through improved public transport in order to support economic growth, prosperity and employment in the area and to introduce faster and more reliable train services between Oxford, Cambridge and East Anglia.
The Bedford – Sandy – Cambridge corridor is the preferred choice from 20 options which have been considered in detail.  Network Rail will publish written documentation, analysis and evidence supporting the decision in May.
Erica Blamire, Principal Strategic Planner for Network Rail said:  “Interest in the East West Rail project has understandably been high and we are keen to keep people up to date with our progress so far.

“In reaching our decision on the Central Section we have assessed the benefits and costs of several potential broad corridors, with input from rail industry stakeholders and regional working groups, including the local authorities in the East West Rail Consortium and the Department for Transport.
“We’ve considered the station catchment areas for population and employment, operating costs, forecast passenger demand, demand for short and longer distance journeys, and the impact on reducing crowding on the London rail network.
“We’ve also considered the infrastructure needs, train service opportunities and wider impacts that the railway would have. This work has allowed us to reduce the 20 potential corridors which were originally identified down to this single corridor which the evidence indicates offers the best return on investment.”
Once the methodology behind the Bedford – Sandy – Cambridge corridor is published in May, further analysis and consultation will take place to determine options for the ‘line on a map’ route.
Rail Minister Claire Perry said:


“East West Rail is a great opportunity to transform connections across the region. The first phase, which has created new journey opportunities between London and Oxford Parkway via Bicester, is already proving hugely popular.
“East West Rail is an important priority for Government. Because of this, we’ve agreed with the National Infrastructure Commission that they will take the Consortium’s work as an input as part of wider work to unlock growth, housing and jobs opportunities along the Cambridge, Milton Keynes and Oxford corridor.”
Councillor Ian Bates of Cambridgeshire County Council and chair of the East West Rail Central Section Board, added:
“The really good news is that the evidence and analysis supports our intuitive view that the Central Section of East West Rail has the potential to develop into a viable scheme. It will open up the opportunity for new journeys by rail within the region, and longer distance – for example between Bristol and Norwich. It will also improve access to jobs in Cambridge for people living to the west, and deliver significant economic and social benefits. Whilst the actual route between Bedford and Cambridge is still to be determined, this ongoing work fits well with our aspiration to create a new station south of Cambridge to serve Addenbrooke’s.”
The development work undertaken by Network Rail will allow the central section scheme to demonstrate a solid evidence-base to be put forward for consideration for investment as part of the rail industry’s long-term planning process.