The first five vehicles in an order for 74 Enviro400 hybrid double decks were delivered into London this week.
All 74 buses will be new-generation Alexander Dennis Limited (ADL) MMC models and will be introduced progressively between now and the end of the year. 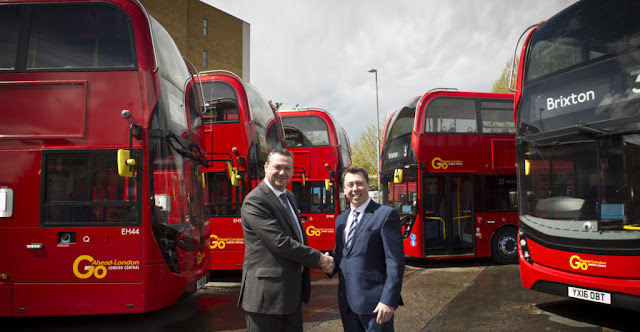 They will operate as part of the Go Ahead London fleet, running out of Camberwell Bus Garage on Route 35 (Brixton) and Route 40 (between Aldgate and Dulwich Library).
These latest additions form part of a strategy that will see Go Ahead London increase its hybrid fleet to 600 by the end of this year, representing 26% of their total 2,300 vehicles in the capital.
Richard Harrington, Engineering Director at Go Ahead London, said: “This is a big year for us and these latest deliveries from ADL represent another quantum leap in terms of staying at the forefront of the drive towards ultra, low-emission vehicles.

“We will take that effort a stage further later this year when we introduce Europe’s first large-scale fleet of 51 pure electric buses. ADL will again be involved in this project as part of a joint initiative with BYD, the Chinese bus manufacturer.”
Asked about the anticipated speed of transition from hybrid to pure electric, Richard struck a cautionary note, commenting: “The important issue at this stage is being prepared to participate in new technology initiatives.
“At Go Ahead London we have always been ready to play our part in working with TfL and manufacturers to develop and trial the technology advancements that may ultimately become the norm. We will learn a great deal from the pure electric project, as will others, but it remains clear that hybrid will also play a big part in the short to medium-term.
“TfL’s aim is to have 300 electric buses in operation by 2020, which is a realistic objective in light of the energy supply issues that would surround a whole-scale transition.
“So, the message is clear: We need to keep working on improvements to the technology that is tried and proven – and capable of doing an 18-hour shift day after day – while also keeping one eye on the future.”
Commenting on the order for 74 Enviro400H MMCs, Martin Brailey, ADL’s Sales Director for London and the South East, said: “This is another positive step in our well-established relationship with the Go-Ahead Group. It takes our total hybrid sales in the UK to beyond the 1,000 mark with around 500 for London and a further 500 operating across the country in places such as Reading, Oxford, Essex, Lincoln, Yorkshire, Manchester, Renfrewshire, Glasgow, Lothian, Perth and Dundee.
“That sort of geographical coverage is testimony to the performance of our hybrids and their wide-spread acceptance by operators and transport authorities.”