The number of train services running from North Wales to Manchester Airport will triple from the start of the new summer timetable.
An application from Arriva Trains Wales to extend their existing agreement has been approved by independent regulators, the Office of Rail and Road (ORR).
The move will see the number of direct trains from North Wales and Chester to Manchester Airport increase from 17 to 57 weekly. Trains will start at Llandudno.
Arriva say the extension will bring “strong economic benefits,” as well as improved access to the airport for many North Wales residents.

Vale of Clwyd MP, Dr James Davies said: “This is a victory for common sense – Manchester Airport is by far the most important international airport serving North Wales and is easily reached by road but for most, travel by rail has been a non-starter.


“This is good news for those seeking holidays abroad but I hope will also assist in boosting the North Wales economy.”
Over the weekend, Wrexham MP, Ian Lucas tweeted: “Great news! Six new return rail paths daily to Manchester Airport from North Wales from Monday ATW tell me! Perseverance!”
However, Network Rail feared the increase would bring “unmanageable pressure” on train performance and impact on other rail operators.
Reacting to the plans at the time, a spokesperson said: “Network Rail and others were asked for views (by the Office of Rail and Road).
“We provided a response in February and, along with others, raised concerns that the increased number of trains could negatively affect the reliability of the railway for passengers.”
But they said they would “act in accordance” with the ORR’s decision.

Business surveys have revealed significantly more Welsh residents fly from Manchester than any other airport. 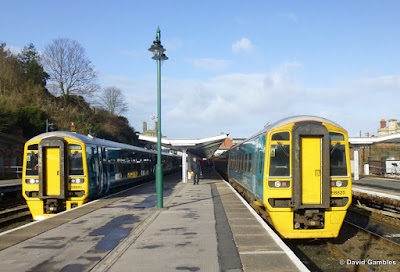 According to the latest figures released by the Civil Aviation authority, more than 849,000 Welsh residents used Manchester Airport in 2014.
Ian Bullock, managing director of Arriva Trains Wales said: “We are extremely pleased that the Office of Rail and Road has approved our application for the rights to extend services to Manchester Airport.
“We had significant customer and stakeholder support for this extension, including from Edwina Hart, former AM and minister for economy, science and transport, local AMs and MPs.
“We will now run an additional 40 direct train services every week from North Wales through to the airport and return.
“This will complement the existing 17 trains a week to make a total of 57 direct, return journeys connecting North Wales to the rest of the world via Manchester Airport.”

He added: “Our stakeholders and customers have been keen that we improve the access for people to travel direct by train along the North Wales coast to Manchester Airport (and vice versa) and that this service extension will bring significant benefits to the economy of North Wales.”