WEST YORKSHIRE will remain in gridlock unless Britain’s top transport and technology experts are hired to overhaul the region’s road and rail infrastructure.

The warning comes on the eve of Leeds Council’s transport summit which has been hastily arranged after the city’s trolleybus plan was thrown out by a Government planning inspector because the flawed scheme would have exacerbated congestion. 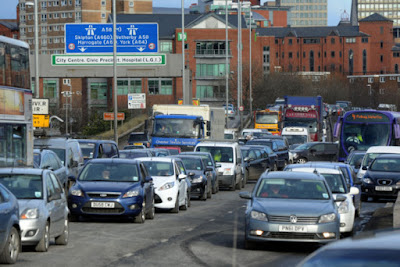 However Simon Cooke, the Conservative leader on Bradford Council and a member of West Yorkshire Combined Authority which co-ordinates transport policy, predicts “an exercise in navel gazing” after £72m of public money went to waste.

Writing in The Yorkshire Post, here
he questions the ability of existing leaders to deliver major infrastructure projects and says investment needs to be targeted at schemes that will benefit the wider region. “A fundamental problem with the planning of the trolleybus scheme was an absence of genuine expertise,” he says.
“I suspect the invitation list will consist largely of those responsible for the debacle, possibly accompanied by a few people with some limited knowledge of transport planning.
“Now is the right time to hold a genuine, fit for purpose, summit, bringing together transport and technology experts from across the country – and possibly beyond – to brief leaders and officials on where the future of transport is heading.
“This would be more useful than holding a summit that feels like a token gesture – more an exercise in naval-gazing. The proposed summit appears to have a very narrow remit, for a small number of people, currently ill qualified and insufficiently informed, to take decisions of critical importance without the input of high level expertise.”
A Leeds Council spokesman said the final guest list is still unclear because organisations have been asked to send representatives.

However he did confirm that West Yorkshire Combined Authority would be represented by Keith Wakefield, Leeds Council’s leader at the time of trolleybus and now head of transport on the regional body.
The spokesman also declined to comment on whether Leeds Council had discussed the position of city development director Martin Farrington after the official told the trolleybus inquiry that he was not a “transport planning” expert.
“It is not the council’s policy to discuss matters relating to individual employees,” he said.
The same response was offered when the spokesman was asked if Mr Farrington still retained the council’s confidence.
After the summit, Leeds Council intends to hold community meetings before deciding how to spend the £173m which the Government allocated for trolleybus.
Council leader Judith Blake hopes this “inclusive discussion” will lead to an “ambitious and realistic 30 year vision and plan for transport in Leeds”.
“Above all else, that plan should be deliverable, and focus on the outcomes that we know are most important to the people of Leeds – faster journeys, more capacity, economic growth and better air quality,” she added. “How people get from A to B has become an increasingly pivotal issue.”