Two options have been drawn up to outline how Nottingham's tram system could extend to Derby as part of plans for the HS2 high-speed rail network.
One tram route would follow the A52 to Derby city centre, while another proposed route would go through Borrowash and Spondon.
The route would connect the two cities with the proposed HS2 station in Toton, Nottinghamshire.
East Midlands Councils said there is no guarantee a tram will be chosen.
Andrew Pritchard, from East Midlands Councils, which is co-ordinating the region's work on HS2, said "a range of options" were being looked at. 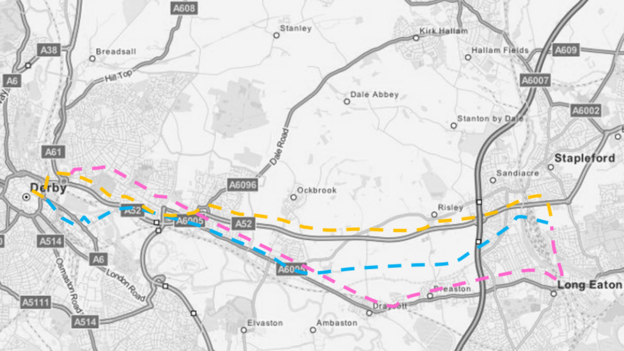 One possible route goes through Toton, down the A52 to Derby city centre, while the other follows the A6005 through Borrowash and Spondon

He said these included a tram, but also high-speed buses, trains and improvements to the road network.
"Nottingham Express Transit have been looking at a range of options for extending the tram route as far as Derby but also into Long Eaton and East Midlands Airport", he said.
Mr Pritchard said the A52 route would be "quite quick" but may not pick up as many people as the other route option. 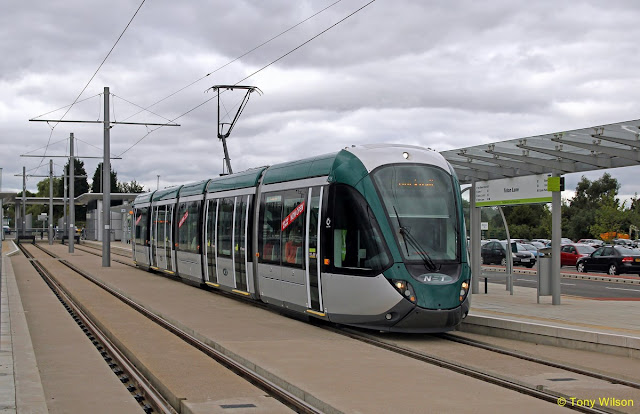 "They're just two concepts at the moment rather than routes but they're worth further exploration and analysis," he said.
Work will now be done to develop an "outline business case for a limited number of options" over the next few months.
The cost of the work is not part of the budget for the national £50bn HS2 project.