The world's longest and deepest rail tunnel has officially opened in Switzerland, after almost two decades of construction work.
The 57km (35-mile) twin-bore Gotthard base tunnel will provide a high-speed rail link under the Swiss Alps between northern and southern Europe. 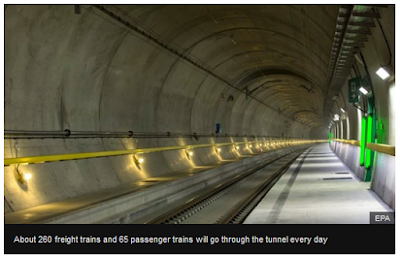 Switzerland says it will revolutionise European freight transport.
Goods currently carried on the route by a million lorries a year will go by train instead.
The tunnel has overtaken Japan's 53.9km Seikan rail tunnel as the longest in the world and pushed the 50.5km Channel Tunnel linking the UK and France into third place.
European leaders, including German Chancellor Angela Merkel, French President Francois Hollande, Italy's Prime Minister Matteo Renzi and Austrian Chancellor Christian Kern are to attend the day's events, along with European Commission chief Jean-Claude Juncker. 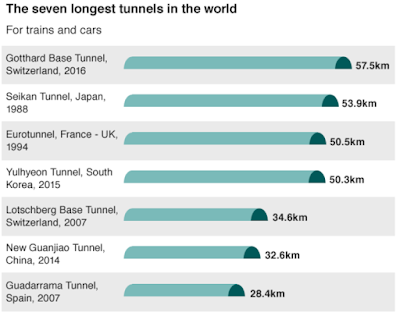 The presence of such high-level guests at the opening shows that the new tunnel is about more than protecting the Alpine environment, the BBC's Imogen Foulkes reports.
Europe's goods, whether Italian wine for the Netherlands or German cars for Greece, have to cross the Alps. Now they will able to do so more quickly, more safely, and more cheaply. our correspondent says.
The project, which cost more than $12bn (£8.3bn) to build, was endorsed by Swiss voters in a referendum in 1992. Voters then backed a proposal from environmental groups to move all freight travelling through Switzerland from road to rail two years later.
The completed tunnel travels up to 2.3 km below the surface of the mountains above and through rock that reaches temperatures of 46C.
Engineers had to dig and blast through 73 different kinds of rock, some as hard as granite and others as soft as sugar. More than 28m tonnes of rock was excavated. 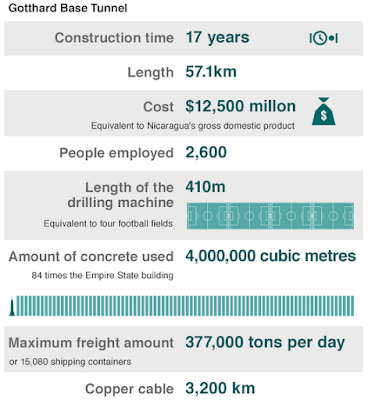 Now the completed tunnel - delivered on time and within budget - will create a mainline rail connection between Rotterdam in the Netherlands and Genoa in Italy.
When full services begin in December, the journey time for travellers between Zurich and Milan will be reduced by an hour to two hours and 40 minutes.
Its trajectory will be flat and straight instead of winding up through the mountains like the old rail tunnel and a road tunnel opened in 1980.
About 260 freight trains and 65 passenger trains will pass through the tunnel each day in a journey taking as little as 17 minutes.
The tunnel is being financed by value-added and fuel taxes, road charges on heavy vehicles and state loans that are due to be repaid within a decade.
Swiss bank Credit Suisse has said its economic benefits will include the easier movement of goods and increased tourism. 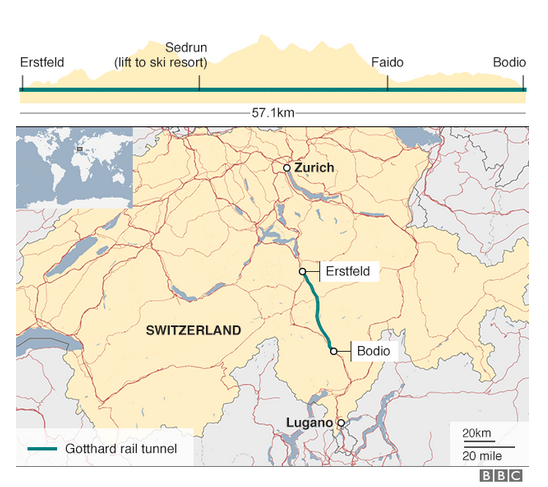