A decision on airport expansion in south-eastern England is to be delayed until "at least October", Transport Secretary Patrick McLoughlin has said.
The move follows the UK's Brexit vote, which triggered a leadership contest in the Conservative government.
Heathrow and Gatwick airports have been vying with each other over building an extra runway.
Heathrow boss John Holland-Kaye said expansion "must be a key building block in the government's Brexit plan".
"It will allow British exporters to trade with all the growing markets of the world, strengthening Britain's position as one of the great trading nations," he said.
"And at a time of uncertainty, a £16bn privately funded infrastructure investment will create jobs and growth across the UK."But Gatwick Airport chief executive Stewart Wingate said: "The enormous pollution [of] both noise and air quality that Heathrow inflicts on hundreds of thousands of people, if not millions, it's this issue that politicians are going to have to grapple with."
"If you look at Gatwick, we have a tiny fraction of the environmental impact of Heathrow, yet you get all of the same economic benefits, all of the same connections to short haul and long haul destinations, all at a cheaper price."
Gatwick will press its case with the new leader of the Conservatives, he added. 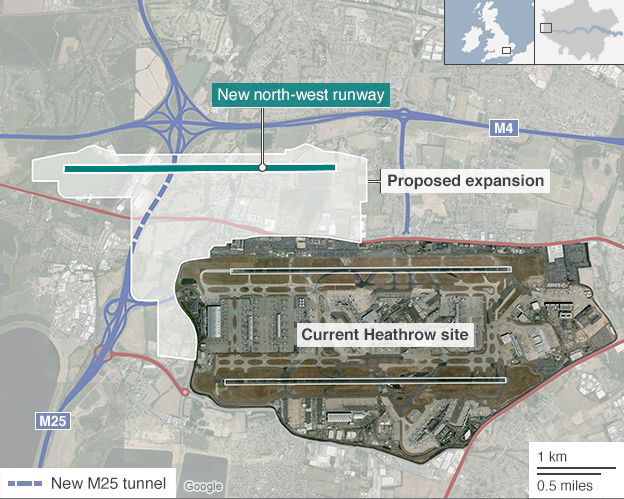 Last July, the Airport Commission recommended Heathrow be expanded with a third runway - a 3,500-m runway north of the two existing ones - at an estimated cost of £18.6bn.
But in December, the government delayed its decision, saying further work on noise, pollution and compensation needed to be carried out.
On Monday, Gatwick Airport said the Brexit vote showed it was "clearer than ever that only Gatwick can deliver the new runway Britain needs".