SINGAPORE metro operator SMRT is shipping 26 of its 35 C151A trains back to Chinese manufacturer CRRC Sifang for rectification after structural defects were discovered on the six-car sets. 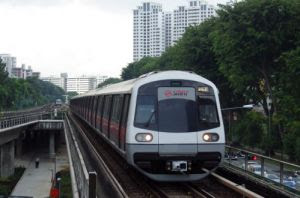 SMRT placed a $S 368m ($US 272.7m) order with Kawasaki Heavy Industries and CSR Sifang (now CRRC Sifang) in 2009 for 22 of the trains for use on its North-South and East-West lines, which was followed by an order for 13 further sets in 2011. The trains began to enter service in 2011 with delivery completed in September 2014.
However, Hong Kong-based news agency Factwire reported that SMRT is now returning the trains, which are still under warranty, with five reportedly repaired since 2015. Photos on its website show individual cars loaded and onto the back of lorries and covered in green tarpaulins as they were transported in the early morning from SMRT's Bishan Depot to Jurong Port.
Responding to subsequent queries from local media, SMRT confirmed that it is returning the trains to the Chinese manufacturer for rectification.
"Our engineers discovered that 26 of the 35 trains delivered by the manufacturer had cracks in the structure connecting the car body and the bogie after they were delivered in 2013," says Mr Lee Ling Wee, SMRT Trains managing director. "Since then, we have been working closely with the Land Transport Authority and the manufacturer to rectify the issue.
"The defective trains, which are still under warranty, will be repaired by the manufacturer. All 26 trains will be repaired by 2023."
CRRC Sifang subsequently confirmed that the first repaired set had safely covered 300,000km in service since returning to Singapore and in a statement said the defects were caused by unqualified raw materials used in the aluminium alloy profiles in certain batches. It says that systematic analysis showed that the defects bear no risk to safety and will not impair safe operation. "However, based on the sense of accountability to our valuable customers and products, CRRC Sifang offered to send the trains with local defects back to the manufacturing facility for repair," the statement said.

Lee added that while SMRT was aware of the fault, the operator has monitored the defects closely to ensure they are safe for operation. "A monthly safety assessment is also conducted by the Land Transport Authority (LTA) and the manufacturer before the train is put into service," he said.
At the time of the contract award, KHI said it was responsible for overseeing the project, designing and manufacturing the bogies, and purchasing the primary components. CRRC Sifang was responsible for manufacturing the other parts of the car including the carbody, as well as assembly, and factory tests.
According to FactWire's report, which cites CRRC Sifang employees, KHI is manufacturing a new aluminium carbody, with the parts from the existing trains removed and reassembled by CRRC Sifang engineers into the new car body, in a process that takes around four months.
CRRC Sifang says it has since carried out internal reviews of quality assurance practices and drafted improvement approaches. It adds that in response to the problem it will further refine its requirements for supplier management and raw material inspection, and intensify quality management during R&D, procurement, manufacturing, quality control, and after-sales service.


According to an article in the Hong Kong Free Press here
The MTR Corporation knew about cracks in Chinese-built subway trains destined for Singapore in 2014, but continued to order trains from the Chinese company since safety issues were not involved, the corporation has said. 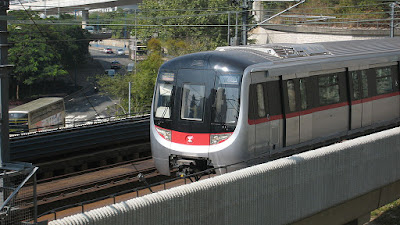 Last week, multiple emails that had been sent to the Transport and Housing Bureau emerged, warning that there were “irregularities” in the MTRC’s tender process for new urban line trains. No factory visits had taken place, nor formal meetings with potential suppliers, and the tender process was six months shorter than the usual 14 to 15 months.