Visitors to the recent Farnborough Airshow were treated to a demonstration flight of the new Boeing 737 MAX, the successor to the Boeing 737 Next Generation series. The 737 MAX is the fourth generation of the 737 family, with the primary change being the use of the larger and more efficient CFM International LEAP-1B engines and modifications to the airframe.
As of 31 March 2016, Boeing has 3,218 firm orders for the aircraft. The 737 MAX first flew on January 29, 2016, nearly 49 years after the maiden flight of the original 737 on April 9, 1967; the MAX is scheduled for first delivery in 2017 with launch customer Southwest Airlines.

According to the Boeing website the 737 MAX  delivers 8% lower operating costs than its main competitor. The new 737 MAX Advanced Technology winglet increases fuel efficiency by 1.8%. More

737 MAX has a 40% smaller noise footprint than today's single-aisle planes.

Watch a You Tube video of the demonstration flight here 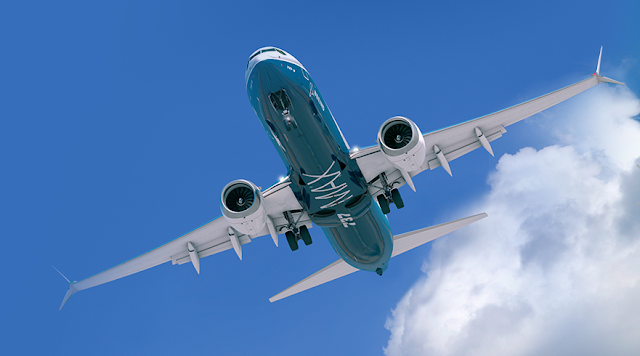 The 737 is the most successful plane ever built: Boeing has sold more than 9,000 of them, and many more are on order for the world’s two giant budget carriers, Ryanair of Ireland and Southwest of the US. A 42-year-old version is still active in Canada, and is believed to be the oldest jet still flying in passenger service anywhere in the world, at 42 years. (Plane years are rather like cat years, so anything over 25 years is almost unknown.)