It may look like something from the future, but China's long-awaited "straddling bus" ran its inaugural test in Hebei province this week. 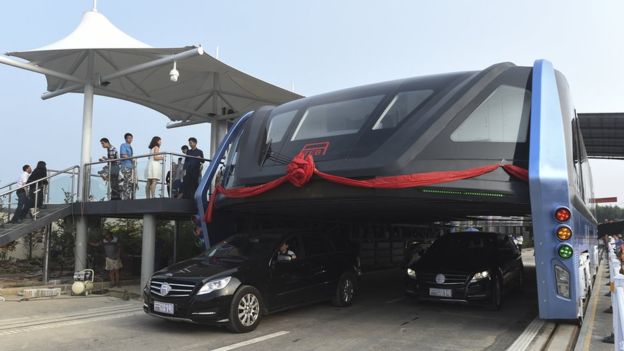 The 2m-high Transit Elevated Bus (TEB) straddles the cars below, allowing them to pass through.
Powered by electricity, the bus is able to carry up to 300 passengers in its 72ft (21m) long and 25ft wide body.
A video of a mini-model of the vehicle caused great excitement when it was released in May.
The trial run was conducted on a 300m-long controlled track in the north-eastern city of Qinhaungdao.
The vehicle is expected to reach speeds of up to 60km per hour, running on rails laid along ordinary roads. Up to four TEBs can be linked together.
"The biggest advantage is that the bus will save lots of road space," the project's chief engineer, Song Youzhou, told state-media agency Xinhua earlier this year.
"The TEB has the same functions as the subway, while its cost of construction is less than one fifth of the subway," another engineer Bai Zhiming told news outlet CCTV.
One TEB could replace 40 conventional buses, according to the firm. However, it is unclear when the vehicle will be widely used in Chinese cities.
It is not a new idea, but it was not seriously considered until a mini-model of it was launched at the 19th China Beijing International High-Tech Expo in May.
A month later, developers announced that the TEB would be ready for a test-run in August.
Thousands took to micro-blogging site Weibo to express their amazement and incredulity.
"I saw images of this not long ago and now it's actually happening?" asked one user. "This is truly build at 'Chinese speed'".
"I swear I just saw ideas of this in pictures. Now it's appeared in real life," said another. 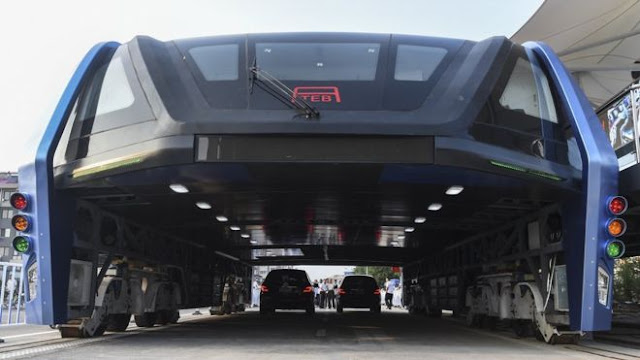