Hafencity Riverbus takes to the Road & The Water

The Hamburg Port Authority has officially approved the vehicle for travel on land and sea. The tour begins in Speicherstadt and onto Landungsbrücken. “This is a real addition to the port of Hamburg and will certainly attract families with children in particular”, said Rolf Strittmatter, provisional head of Hamburg Tourismus GmbH. 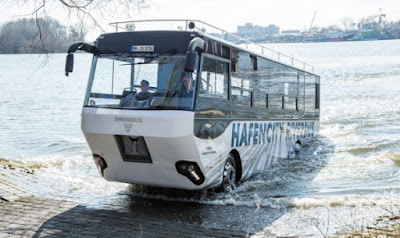 A test drive earlier in the year around Hamburg’s harbour basin caused amazement on social media. “Ever wondered where your bus is stuck…well, on the Elbe in Hamburg port this time. What?”, tweeted one incredulous passerby on discovering the floating bus. From mid April, people in Hamburg can feast their eyes on this strange vehicle, which will offer five to six daily tours of Hamburg port.

The round trip will depart from the Brooktorkai in Speicherstadt where it will travel on dry land to Elbpark Entenwerder in Rothenburgsort. There, the bus will glide off a ramp into the Elbe, where the land-water connection has had to be extended to allow the vehicle into water at low tides. The river-bus can travel at speeds of up to seven knots for half an hour on the Norderelbe to Landungsbrücken and then back to Entwerder from where it will head to Speicherstadt. The whole trip lasts 80 minutes. 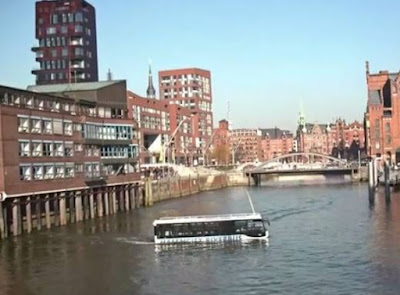 The operators, Jan Peter Mahlstedt and Fred Franken, are pioneers with the river-bus tour. Whilst city tours of this kind are already operated in Rotterdam, Lisbon and London, the concept is unique in Germany. Hamburg was an early choice for this project. “No other city offers such a proximity between water and land – we are trying to take advantage of this with our vehicle,” Mahlstedt told reporters at a recent press conference.


The Hafencity Riverbus has an amphibious body on a MAN truck chassis. The bodywork has been built by a Hungarian company.
It took four years to Obtain a permit to operate the vehicle, as German traffic law does not provide for amphibious vehicles.


"This is neither a bus nor a boat and there haven't really been any comparable vehicles up until now. The workshop staff need an extremely high level of technical knowledge in order to quickly obtain replacement parts," explained Mike Vannauer, Regional Manager Bus Sales North at MAN Truck & Bus Deutschland GmbH.