A BITTER dispute over who operates the doors on Scotland's trains has ended "in a fudge", according to critics, after ScotRail promised to retain conductors on its new trains to close the doors - while making drivers responsible for opening them. 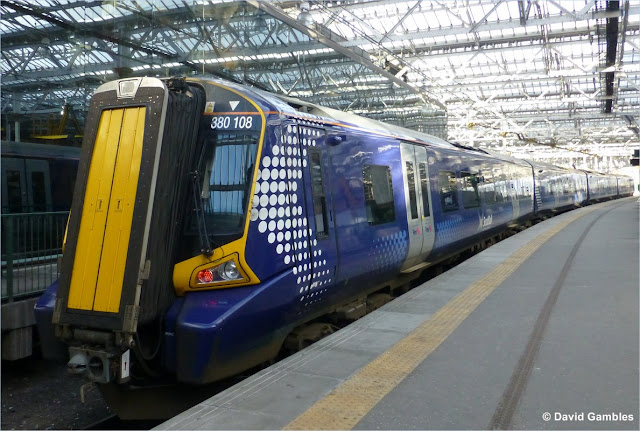 The operator was accused of "chickening out" of the fight with trade union, RMT, while rail industry professionals warned that the decision is likely to ramp up the cost of delivering ScotRail's new electric trains while jeopardising punctuality and journey time targets.
The 100mph trains are set for delivery from Autumn 2017 and will operate on the flagship Glasgow-Edinburgh route, with a target reduction in journey time from 50 to 42 minutes by 2019.


In a statement last night, ScotRail confirmed that it had reached an agreement "in principle" with RMT which will guarantee to deploy conductors as the second staff member on board the Hitachi 385 electric trains, with a clause that drivers will open the train doors while conductors close them.
The arrangement also means that trains already built in Japan as part of the £375 million contract will have to be retro-fitted with door panels enabling conductors to operate the doors, while design specifications for those due to enter the production line will also have to be altered.
John McCormick, chairman of the Scottish Association for Public Transport, said: "It just sounds like a bodge. Our view has always been that the union has got to accept that things move on and stop living in the steam age.
"The idea that trains with ticket examiners instead of conductors are more dangerous is a red herring."  The announcement comes after six weeks of negotiations between ScotRail and RMT, following a series of walkouts by conductors during the summer in protest over the extension of "driver-only" operations.
RMT says the practice - where drivers, not conductors, release the doors - increases the risk of passengers being trapped in doors or falling, but industry watchdogs insist there is no evidence to support the claim.
The practice is already standard in heavily-electrified areas such as Strathclyde, where ticket examiners have gradually replaced conductors.
Currently, conductors are only required on older diesel trains, which lack DOO technology.
David Prescott, an independent rail consultant who previously worked at both ScotRail and Transport Scotland, said: "It's a real mess - ScotRail chickened out, but we knew it was coming.
"It's a fudge which means they will have to foot the bill to recruit and train a load of new conductors and there's probably going to be a stonking great bill from Hitachi to add in the door panels at such a late stage.
"You've also got to wonder what this means for the 42 minute target journey time. It was always tight, but we know conductor operations add valuable seconds to the dwell time at stations, so is that still going to be achievable?"
ScotRail Alliance Managing Director, Phil Verster said: “What we have put forward in our proposal will make our service more efficient and more effective, while maintaining and  enhancing the service we provide to our customers. It means that the new faster, longer, greener trains that will arrive in Autumn next year really will be a revolution in how we deliver our service."
A spokesman for RMT said the potential deal was the result of "long hard hours at the negotiating table" and "a sustained period of determined and solid industrial action" by its members.
The offer will now be put to a vote of RMT members at ScotRail.