This week Focus Transport visits Euro Bus Expo 2016 which is taking place between 1st & 3rd November at the NEC in Birmingham. The exhibition has almost 300 Exhibitors with more than 9,000 visitors expected to visit over the three day event.

Plaxton’s new-look Elite coach will be shown at UK's premier bus & coach show. The coach is said to have extensive exterior modifications to further enhance its already strong, iconic kerb appeal,” says ADL. A Panther B8R Exec will also be on display.

ADL will also  include the battery-electric BYD/ADL Enviro200EV and the first appearance of the Enviro400CBG. This double-deck biogas-fuelled CNG bus has been developed in partnership with Scania, and will be delivered to Reading Buses.

MAN Bus & Coach UK will be exhibiting three Neoplan Tourliners at the NEC show next week. Two will be customer vehicles, while the third will be a stock vehicle which is designed to showcase an onboard CCTV package offered by MAN.
Both the customer vehicles will be Tourliner VIP models. Doncaster-based Buckley’s Tours will have a Tourliner P21, 12m, 49-seat executive VIP specification which has an MAN D26 440bhp engine and ZF Assist transmission. The vehicle is to be used on both UK and European holiday routes. Buckley’s Tours now operates five Tourliners.
And for GH Watts of Leicester there will be a 13.26m Tourliner P20 tri-axle with 53 seats and executive VIP specification. The coach is powered by an MAN D26 480bhp engine with ZF Assist transmission. GH Watts also operates five Tourliners.
The stock MAN coach will be a Tourliner P22 tri-axle, 13.8m, 61-seat executive Select specification. It is also powered by an MAN D26 440bhp engine with ZF Assist transmission.


“Two of the vehicles have already joined our customers’ fleets, while the third will be brought by MAN and will display the benefits of the onboard CCTV for drivers and passengers,” says Wayne Ulph, MAN general manager of bus and coach. “As well as representatives from the MAN bus and coach team we will have experts from our telematics, warranty, finance and aftersales teams on hand to speak to old and prospective new customers.”

The Focus team will be reporting live from the show with a planned update for lunchtime today.
Check back with us to see pictures of vehicle launches and product announcements. 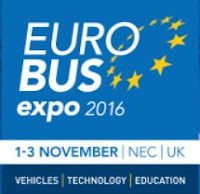