A new platform has been opened at Doncaster station, while Virgin Trains has launched the earliest ever weekday service from Yorkshire into London.
Platform 0, which was opened by Transport Minister Andrew Jones MP, will increase the capacity of trains which can run through this busy station, which is managed by Virgin Trains, and improve the reliability of journeys for passengers. 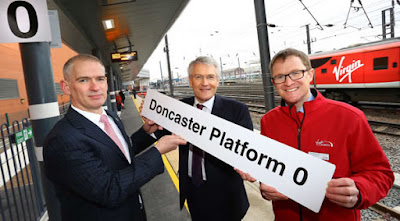 It is the first stage of infrastructure partner Network Rail’s £21m programme of improvements at Doncaster which will also include track adjustments and improved signalling.
Meanwhile Virgin Trains’ new 05.07 weekday service from Doncaster to London King’s Cross, which arrived into the capital on time at 07.00 on its first day, is one of a number of timetable improvements that was launched with the new timetable.
A total of 19 additional services are scheduled to call at Doncaster every week. This includes, from tonight, a new 22.57 weekday departure from London King’s Cross to Doncaster and York which is designed to appeal to business travellers and theatre goers.
David Horne, Managing Director of Virgin Trains on its east coast route, said: “Doncaster is a very important and very well served station, and the extra capacity which the new platform will create, along with Network Rail’s improvement of the signalling and infrastructure, will help improve the railway’s reliability.

“This is ahead of the introduction of our new Virgin Azuma trains which will substantially increase capacity, with Virgin planning to operate more than 200 services per day on its east coast route.
“In the meantime, we have today launched the earliest ever weekday service from Yorkshire into London King’s Cross as part of a new timetable, which will see 19 additional services per week call at Doncaster.”
Andrew Jones said: “It is a pleasure to be here in Doncaster, officially opening this new platform.
“The government is investing £40 billion in our railways, the biggest amount since the Victorian era, to modernise the service and improve routes. Here in Doncaster, the improvements form part of a wider investment in the East Coast Main Line, which will see £247 million spent on enhancements between now and 2024 to improve capacity and journey times for passengers.”
Rob McIntosh, Route Managing Director for the London North Eastern and East Midlands Route at Network Rail, said: “I’m delighted that Platform Zero is now in operation and that rail travellers in Doncaster can now start to feel the benefit of this major piece of investment.

“While the most visually impressive part of the upgrade is now complete, work will continue in the coming months behind the scenes on the track and the systems around the station and we continue to develop our plans for the enhancements across the rest of the East Coast Main Line to improve this vital rail link for the passengers and businesses who depend on it.”