Hitachi unveils the first batch of its new Durham-made trains

Rail company Hitachi has unveiled the first of its new 125mph Intercity Express trains that are being built in County Durham.
The state-of-the-art £82m factory at Newton Aycliffe was opened in September 2015 with the aim of ultimately creating 900 new jobs at the site. 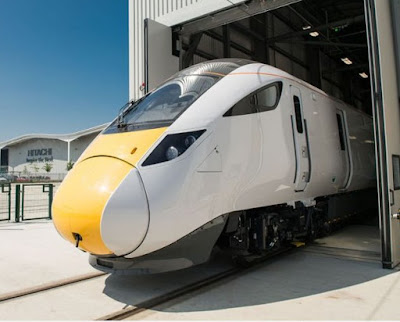 The plant is building 122 new Intercity trains to carry passengers on the Great Western and East Coast main lines. By 2020 Hitachi will have 281 trains running on the UK rail network.
The first of the new trains were unveiled at a ceremony attended by Transport Secretary Chris Grayling, Northern Powerhouse Minister Andrew Percy, and Japanese ambassador Koji Tsuruoka.
Karen Boswell, managing director of Hitachi Rail Europe (HRE), said: “Today is a celebration of the return of train manufacturing to the North East, supporting thousands of jobs and developing a strong engineering skills base in the region.
“Trains running across the country’s rail network will be built by a proud workforce harnessing the best of Hitachi’s long standing rail expertise. The company that built the world famous bullet trains is now building the next generation of UK trains, which will deliver a step change in intercity travel, offering more capacity, greater comfort and a lower carbon footprint.

“HRE is committed to the transformation of UK rail. As our new IEP (Intercity Express Trains) trains become operational, they will bring UK rail travel firmly into the 21st century.
“Today’s launch comes at an exciting time for UK rail and we welcome the Government’s recent commitment to further investment in rail infrastructure and the digitisation of Britain’s railways. As a global rail pioneer, our cutting-edge digital technology and long-term commitment to the UK means Hitachi is well positioned to deliver these exciting programmes and transform passenger journeys.”
Kentaro Masai, chief operating officer of Hitachi’s railway systems business unit, Hitachi, Ltd, said: “It was 90 years ago in 1926 that a senior Hitachi engineer first visited the North of England to study the leading edge railway technology of the time. Today, we have a modern intercity train built in the North East by combining the best of Japanese technology delivered with the best of British manufacturing.”
Hitachi’s investment in County Durham is part of plans to employ 2,000 people across 14 sites around the UK. The company also hopes to support thousands of jobs in the supply chain.
David Horne, managing director of Virgin Trains East Coast, which will see production of its new trains at Hitachi next year, said: “It’s a great privilege to be given a tour of these new facilities which will provide a big economic boost for the North East.

“This factory will also start producing our new Azuma trains in 2017 and we’re looking forward to them entering service and transforming the experience on the East Coast.”