This week we will look back at some of the events that took place during 2016 and here we look at the opening of the new Bus Station in Hexham.

Northumberland County Council opened the new Hexham Bus Station on Tuesday 29th November. The new site is positioned on the edge of the town some distance from the old Bus Station which was centrally located and convenient for access to the town centre.
The new Bus Station offers five stands for buses and is provides a much easier access for buses but not for passengers.
The council consultation resulted in a clear message from residents who said that they much preferred development of the existing site. This was totally ignored as there was a juicy deal on the table from developers who saw the advantages of the central site of the old Bus Station. 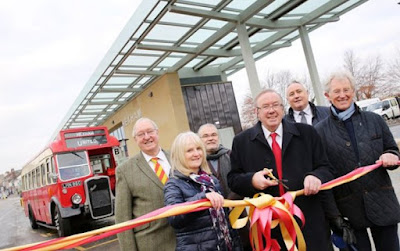 Symbolising the move from the old to the new, a 1949 Bristol single-decker, ex United Automobile from the Aycliffe and District Bus Preservation Society drove guests from the old bus station to the new facilities, at Loosing Hill in the town. 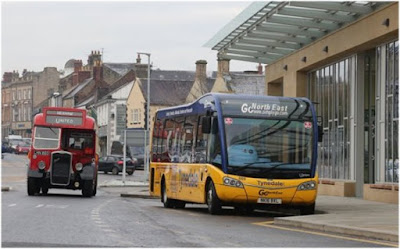 Funding for the new development has come from Northumberland County Council, and includes a grant of £300,000 from the North East Rural Growth Network’s Strategic Economic Infrastructure Fund.
Council leader Cllr Grant Davey spoke at the event about the council’s investment in the market town of Hexham. He said:  “This is a further piece in the investment jigsaw for our market towns.  Here in Hexham we are constructing a new fire station just across the road behind the hospital, and redeveloping the Grade II listed Hexham House - to make a beautiful wedding venue and provide holiday accommodation that will bring much more business to the town.
“We are also investing in bringing a range of frontline council services together, with easy access, at the Queen's Hall, and have just announced plans to build a new multi-storey car park in the town to manage the growing number of workers, shoppers and visitors.
“As a council we are proud of our work and investments in making great places like Hexham even better.”
The new bus station provides modern facilities for passengers including an enclosed waiting area, toilets, refreshments and travel information.  There are also facilities for bus company staff.
The attractive building was designed by ‘plus three architecture’ (+3A) to reflect the past, present and future of Hexham as a thriving market town.  The design provides a connection to the character of the town and creates a distinctive new place within the urban fabric.
The building features natural sandstone, glass windows with stained panelling, wooden seating and planting areas.
Cllr Ian Swithenbank, cabinet member for local services at the council said:  “I have been extremely pleased to declare this new bus station for Hexham officially open.  It is set to provide top class facilities for bus users, within a most attractive new building.
“As well as excellent new public transport facilities the overall scheme will give a huge boost to regeneration within the town, including through redevelopment of the old bus station site.”
The building the new bus station at Loosing Hill has released a prime development site on Priestpopple near the town centre which the council have had in mind throughout the whole process.
Dysart Developments Limited has gained planning permission for the site which will include new shops, housing and a pedestrian route to town centre parking and further retail at the Marks and Spencer and B&M Stores site.
The scheme will provide 2,466m2 of commercial floorspace, 31 apartments and five affordable homes, and according to the council press release is expected to generate in the region of 126 jobs and other significant economic benefits to Hexham and the wider Northumberland economy. 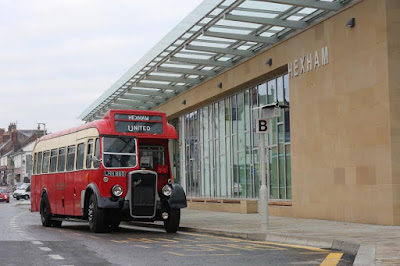 The Rural Growth Network secured £6 million capital investment from the North East Local Enterprise Partnership (LEP) Growth Deal - Local Growth Fund to support businesses in the rural areas of Durham, Gateshead and Northumberland.
Refreshments for passengers and those visiting the new bus station area will be provided by a new business called Tasty Bites, which has also created two new jobs.
Local businesswoman Deb Humble from Country Concierge has opened the catering outlet which will provide tea, coffee and home-made soup to take-away along with sandwiches, cakes and other sweet and savoury snacks.
The new bus station and site are owned by Northumberland County Council and will be managed by Go North East.
David Curry, Operations Director from Go North East said: "We're delighted to move into the new Bus Station.  It offers our customers a high quality waiting area to match the high quality bus services we offer for Hexham and the Tyne Valley.” 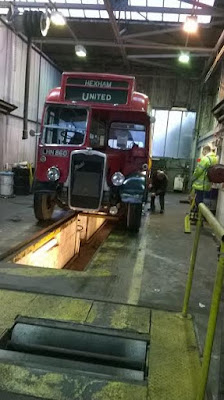 The Bristol L was stabled overnight at the Hexham depot of Go North East, this picture showing Aycliffe driver David Hogg isolating the batteries after the vehicle had been parked over the pit.

After the opening ceremony, the Bristol L retraced a portion of the United 34 route from Hexham to Lemington road end, after which it was taken to Beamish museum to take part in the Christmas event.

Hexham has a good selection of bus services and below is a selection of pictures taken at the old Bus Station during 2016. 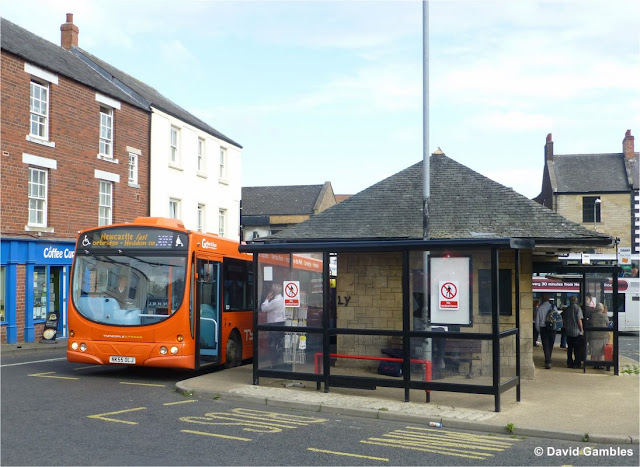