Scarborough and District buses are running four new single deck buses representing about £½million out of a total investment of £1.6million in ten new buses for the EYMS Group fleet. 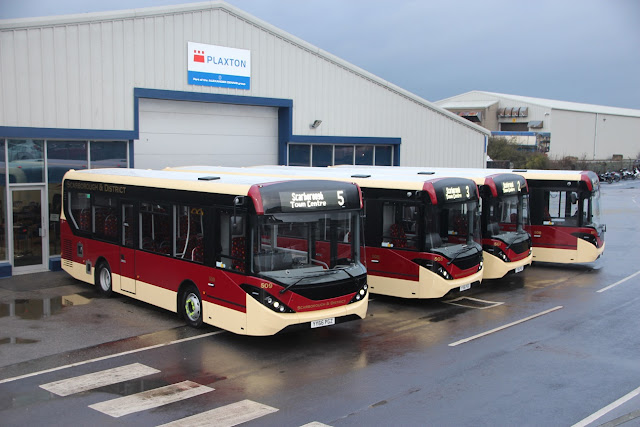 The other buses are six double decks which are going into the East Yorkshire fleet in the Hull and Withernsea area, but the four new buses for Scarborough have been locally built by Alexander Dennis Limited (ADL) at its Plaxton factory and they will replace much older similar size buses in the Scarborough and District fleet.
The four, each seating 30 and built to the very latest exhaust emission requirements, will be used on local town services in Scarborough.
Peter Shipp, chairman and chief executive of EYMS Group, which owns Scarborough and District buses, said “Naturally we are delighted to have been able to “Buy Local” and I am also able to announce that we are just about to place an order for five more similar buses which will also be built at Plaxton in Scarborough next year.”
“Times are extremely tough for bus operators at the moment, particularly independent private operators such as EYMS, mainly due to central and local government funding cuts and the damaging effect of ever increasing traffic congestion.  However we still need to do as much as we can afford to update our fleet which would otherwise simply get progressively older and more expensive to maintain. And, of course, we want to provide as many modern buses as possible for our passengers to use and our staff to drive.”
Arthur Whiteside, MD UK Sales at ADL, said: “These new Enviro200 buses will deliver the environmental benefits and low cost of ownership that makes this model the UK’s best-selling midibus. Built in our factory in Scarborough, they are a double boost to the local economy and we look forward to continuing our long standing successful relationship with EYMS Group with the new order for another five Enviro200.”