The results of the investigation into the fire aboard the prototype D-Train have been published. The investigation was commissioned by Vivarail Chief Executive Adrian Shooter in the immediate aftermath of the fire on the D-Train, which brought the three-car diesel-electric multiple unit to a halt at Kenilworth. 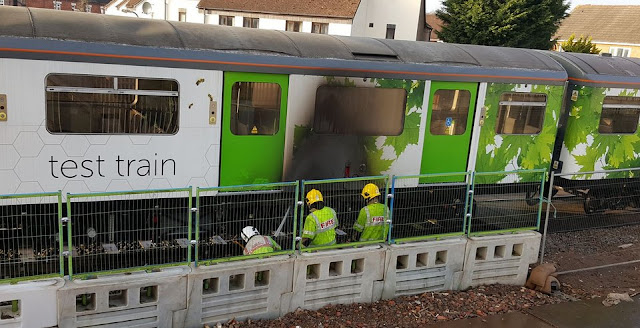 Conclusions
The Fire that occurred on unit 230001 on 30th December 2016 was caused by a fuel leak in the high-
pressure fuel system on Genset 4 that was subsequently ignited by a hot body – likely to have been
the turbocharger. The fuel leaks were likely caused by a repair intervention on Genset 4 by the
genset supplier and not spotted due to the lack of suitable test procedures post repair work.
The passenger saloon of the vehicle was unaffected by the heat of the fire, despite the intensity
and duration, and whilst some smoke did enter the saloon the rate of build-up and intensity were
such that had passengers been on board it would have been possible to evacuate safely.
Several contributory factors led to the fire being more intense and burning for longer than might
have been the case, including the design of the low-pressure fuel system and the design of the fire
suppression system.
The fire alarm worked correctly and allowed the traincrew to quickly assess the situation and plan
where to stop and the GSMR radio allowed rapid and effective communication with the Controlling
Signaller.
The fire damage to the air pipe internal to the genset and subsequent loss of main reservoir air
pressure led to the train stopping out of the control of the driver, thus failing to meet the
requirement to be able to operate for 15 minutes after the outbreak of a fire.

The incident was reported to the Rail Accident Investigation Branch (RAIB), but RAIB has since confirmed to RAIL that it will not be conducting its own investigation.