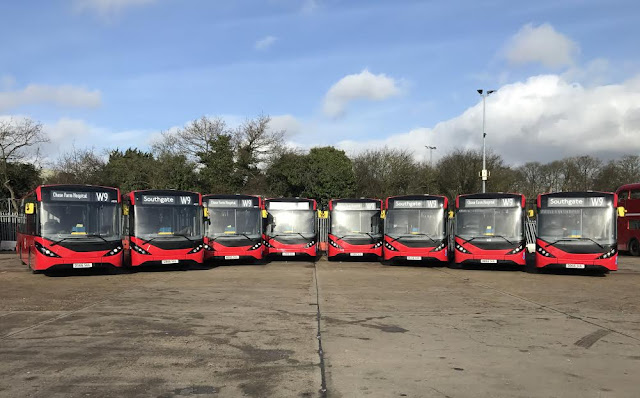 Their Cummins Euro 6 engines are matched to Voith transmissions and use state-of-the-art stop/start technology. ADL was the first bus manufacturer to bring this innovative technology to market. The Enviro200 are built to Low Carbon Emission Bus standards, and their environmental advantages are matched by their low fuel consumption, which helps to ensure low operating costs. Route W9 runs between Southgate and Enfield in North London. In addition to school buses, it is Sullivan Buses’ second TfL service after route 298, which the operator won five years ago with six previous generation Enviro200, and retained upon re-tendering. They will be joined later this year by route 217, for which 12 Enviro400 double deck buses have been ordered. Dean Sullivan, Owner and MD of Sullivan Buses, comments on his choice of ADL: “Sullivan Buses are the only independent operator suppling bus services to Transport for London. As a result when submitting our bids we needed to work closely with a vehicle manufacturer. We built up a good working relationship with ADL over a number of years and have been impressed with the quality of vehicles supplied over that time, so we naturally chose ADL again to partner with us though the process. I am grateful for the assistance we received during the bid process and for ADL’s commitment to deliver the buses on time and within budget. This gave us considerable confidence especially given the tight lead times from placing the order to commencing the service. “Passenger and driver reaction to the new buses has been fantastic with several complementary remarks on the first day of service alone. We are looking forward to continuing to work with ADL on future TfL projects.” Martin Brailey, ADL’s Regional Sales Director London and the South, says: “We are delighted that Sullivan Buses has been successful in winning these TfL routes and has chosen ADL buses for them. These orders are a testament to ADL’s customer focus, which makes the Enviro200 and Enviro400 the buses of choice for independent operators as much as for anyone else, and I look forward to continuing to support Dean Sullivan as his company goes from success to success.”