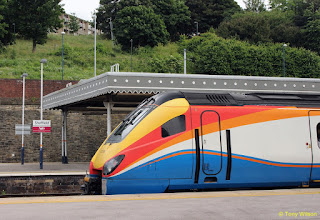 After submitting an expression of interest, the following have been successfully shortlisted:
Rail Minister Paul Maynard said:

A flourishing rail network brings real growth and prosperity to the region it serves. That is why we are making the biggest investment in the national rail network in more than 100 years to deliver the safer, faster and more comfortable journeys that passengers want.

At the same time, Network Rail is working on improvements which by 2019 will enable the next East Midlands franchise to deliver more carriages and faster journeys over the whole route, including almost twice as many seats into London St Pancras in the peak hours.

I am delighted that all these first-class companies have demonstrated their confidence in our vision for the future of the rail industry in Great Britain by bidding for this key franchise.

The new franchise is vital in supporting government ambitions to make the Midlands region an engine for growth by improving connections within and outside the region and supporting the East Midlands industry and leisure economy.
In particular, ministers want to improve the quality, frequency and timings of journeys on the east of the franchise network and to seek to develop new services and connections.
The new franchisee will also be expected to satisfy predicted growth in demand, in particular into London St Pancras, but also for local crowded services like Derby-Crewe.
Though the current franchise, operated by East Midlands Trains Limited, is due to end on 4 March 2018, the Secretary of State has powers to extend it further by up to a year.