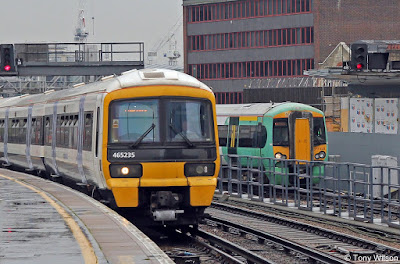 Rail fares in London and the south east went up by an average of 1.5 per cent at the start of the year, according to official figures.
It was the second year on the trot ticket prices have risen by less than inflation although they have gone up by 13 per cent more than the cost of living since 1995.
Capped fares such as commuter season tickets rose by 1.7 per cent in January, while unregulated fares, which includes many off peak journeys went up by 1.1 per cent, according to data from regulator the Office of Rail and Road (ORR).
Fare increases have generally outstripped the Retail Prices Index since privatisation in the mid-Nineties but have fallen dramatically in recent years.
Plans for a major shake-up of Britain’s complex “fares jungle” was announced in February to make them less confusing for passengers.
The Department for Transport published an action plan which also promised more user-friendly ticket machines and easier journey planning.
“We recognise that the fares system is complicated and hard to navigate, and the impact this has on people’s trust in the railway,” said Rail Minister Paul Maynard. “This is a first step to improving the passenger experience of fares and ticketing, and there remains more to be done.”
A week later, the ORR revealed that 13 per cent of passengers have lost out financially because they did not select the appropriate ticket for their journey.

With the rapeseed harvest now in full view, what better way to post a link to a miscellany of images past and present to brighten up a spring day. These are all in an album which can now be viewed by clicking   here