By the end of next year, no fewer than 19 new double-decker Postbuses will come into service
in Eastern Switzerland. They are the first British vehicles to be produced for PostBus. 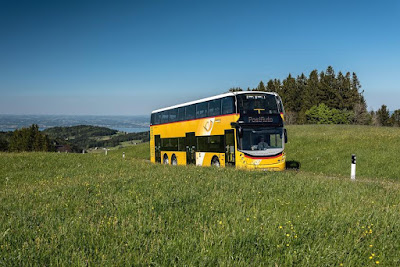 Eastern Switzerland has become the PostBus hub for double-decker buses with the addition of 19 new vehicles. Double-decker Postbuses have been part of the fleet in Eastern Switzerland since 1995. The third generation is now being produced, as the double-decker buses used up until now are becoming outdated. The first two of the new vehicles will be used on the Engelburg–St. Gallen–Heiden routes and then subsequently in the Obertoggenburg and the regions of Rorschach and Goldach. Passengers are more comfortable on double deckers on the winding routes and they offer more seats than articulated vehicles: they have 78 seats and 55 standees, whereas articulated Postbuses have more standing spaces than seats.

These are the first Postbuses to have been produced in the United Kingdom and the first ever British
double-deckers in Switzerland, and are supplied Alexander Dennis, a market leader in this sector. The vehicles ordered for Eastern Switzerland are based on their Enviro500 standard model, but the company has adapted them to PostBus’s needs and Swiss regulations. The first new double-decker was presented to the media in Engelburg (canton St Gallen) on 19 May. During an open day event on 20 May, the local population was able to view the vehicle at the regional PostBus garage. 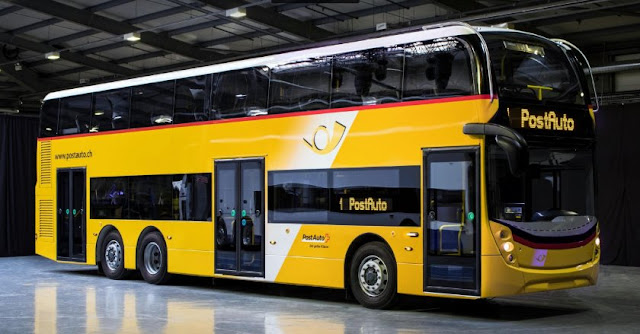 Between now and the end of 2018, the 19 double-decker Postbuses used in Eastern Switzerland up until now will be replaced gradually by the new vehicles. The new vehicles are equipped with two sets of stairs to the top deck, and they have three doors instead of two. Both decks have dual display screens and free WiFi. The vehicles are 13 metres long, 4 metres high and meet the strict Euro 6 emission standard. Besides Eastern Switzerland, PostBus uses double-decker buses for regular services and leisure traffic only in Graubünden and in Central Switzerland. The four in service in Graubünden will be replaced in the next two years by new double-decker buses.