trentbarton is to spend £5m in 2017 on 28 new buses and on upgrades – its biggest ever investment in a single year.
New vehicles will be deployed from July and be put to work serving customers on the skylink Derby and skylink Nottingham airport links and the rushcliffe mainline and allestree routes.
In addition, newly revamped buses will be bringing all mod cons to the cotgrave connection and the keyworth connection services.
Jeff Counsell, managing director of trentbarton, said: “This year we are making a massive investment in our vehicles to keep our customers delighted and to attract even more people to get on our buses.”
“We’re keen to play our part in reducing carbon emissions in the communities we serve, and these buses are some of the greenest diesel vehicles that money can buy”.
The order book includes 25 Enviro200 models from Alexander Dennis (ADL) which are light, fuel efficient and feature improved suspension. They have glazed skylights, LED lighting, visual and audio next-stop announcements, plus free superfast Wi-Fi and USB power at every seat. 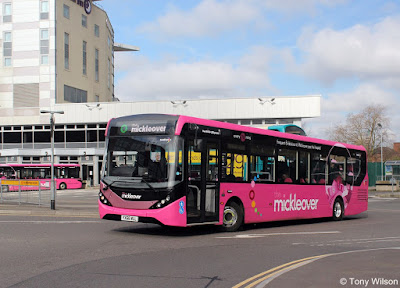 The most recent delivery of new buses to Wellglade's Trent operations has been 22 Alexander Dennis E20D Enviro200 single-decks delivered during late 2016. Eight numbered 101-108 wear dedicated branding for the Mickleover route (above), whilst the balance 151-164 are assigned to the nines (Derby & Mansfield) (below) 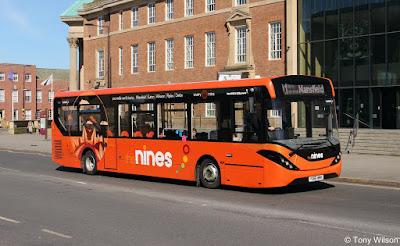 Also on their way from EvoBus are three new Citaro buses by Mercedes-Benz, which will run on the skylink Derby service linking East Midlands Airport with Derby, Loughborough and Leicester. 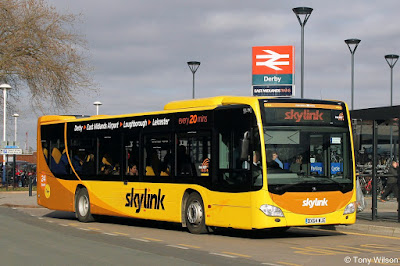 skylink Nottingham will see its new ADL buses from September.
rushcliffe mainline will be joined by nine of the new ADL buses from July and the allestree will welcome five of the buses later in the year.
Counsell said: “In trentbarton land we are bucking the national trend by increasing use of buses by the public. By investing millions every year we ensure travelling by our buses is an experience people enjoy as an excellent, great value way to get about”.
ADL is building the new buses at its Scarborough factory, which also assembled the 22 new buses delivered to trentbarton last year and the nine luxury coaches that joined the red arrow fleet in 2015.
Richard Matthews, sales director at ADL, said: “It’s a great privilege for ADL to partner with a pioneering and innovative company like trentbarton.
“trentbarton is renowned for its unwavering customer-centric approach and outstanding attention to detail – the new fleet of 25 Enviro200 vehicles is testament to this”. 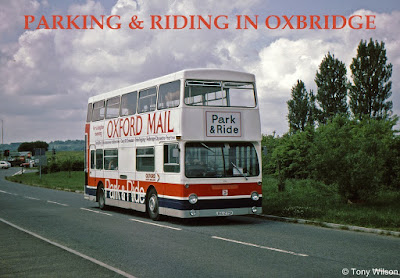 In recent months hosts of new buses have been placed into service on the respective Park-&-Ride networks in both Oxford & Cambridge. Reminders of how the networks have expanded over the years 1980-2014 are in the latest album of images and can now be viewed by clicking  here