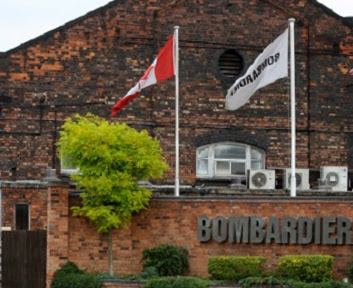 Yesterday (20th June), First Group/MTR, the new franchisee of South West Trains, announced that it had selected the Litchurch Lane firm to supply 750 carriages. The deal, worth £895 million represents the third largest contract the Derby site has won since 2014.
It has previously secured deals worth £1 billion to provide trains for the Elizabeth Line (formerly Crossrail) and East Anglia. The train that Bombardier will be supplying will be the Aventra - the same train that the firm is supplying to the Elizabeth Line and East Anglia.

But with 750 carriages to deliver, the First Group/MTR deal represents the largest ever single Aventra train order. First Group/MTR, a consortium comprising of First Group and Hong Kong state-owned metro operator MTR, said the trains will be supplied in both five-carriage and 10-carriage configurations.
It has also chosen Bombardier to maintain its trains throughout the duration of its seven-year franchise, which starts in August. Richard Hunter, UK managing director at Bombardier Transportation, said the firm was "thrilled" at winning the contract. He said: "It demonstrates further confidence placed in this market leading rolling stock, designed and built in Britain.

"Aventra offers enhanced performance and increased passenger capacity, which will play an important part in helping First/MTR satisfy continued levels of passenger growth on the South Western network. The contract builds upon our strong credentials, following the selection of Aventra for Crossrail, as well as for the East Anglia franchise. We look forward to deepening our collaborative relationship with First/MTR."
Steve Montgomery, First Rail managing director said: "We have exciting plans for the South Western rail franchise and these new trains are an important step on the way to delivering an improved journey experience for our passengers. We know from listening to passengers and stakeholders that alongside improved performance, what they want to see is additional seats and we will deliver this via these state-of-the-art trains."
The trains Bombardier are set to provide will feature wide-open gangways between carriages, air conditioning, WiFi, USB sockets at seat locations, universal toilets and improved passenger information system.
South West Trains is one of Britain's biggest and busiest commuter networks. The new trains will operate on the Windsor, Reading and West London suburban routes. They will start to come into service from mid-2019 and will all be in place by December 2020.
The First Group/MTR deal is the third major contract Bombardier's Litchurch Lane site has won since 2014.Winning the deal is yet another huge boost for Bombardier's Litchurch Lane site - and the companies in its supply chain, many of which are based in and around Derby. Three years ago, the firm secured a £1 billion deal to supply 65 trains for Crossrail (now the Elizabeth Line).
And last year, the Litchurch Lane factory secured another £1 billion contract to build 660 carriages for Abellio's East Anglia franchise. The Derby factory is currently busy delivering trains for the Elizabeth Line, the first of which should go into passenger service this month.
And the East Anglia deal, which secured the future of around 1,000 staff at Litchurch Lane, is set to sustain the factory well into the 2020s. But Litchurch Lane is a huge site with plenty of capacity to take on extra work such as the South West Trains contract.
It is certainly all a far cry from 2011, when there was a very real danger that Litchurch Lane - which at the time was the UK's last train manufacturing site - could have closed due to a lack of orders. The workforce had suffered the bitter blow of missing out on two huge deals to overseas competition.