A special tram paying tribute to the unique spirit of Manchester will run on the Metrolink network from today.
Tram 3022 has been named the ‘Spirit of Manchester’ to celebrate the incredible response of the local community following the Manchester Arena attack. 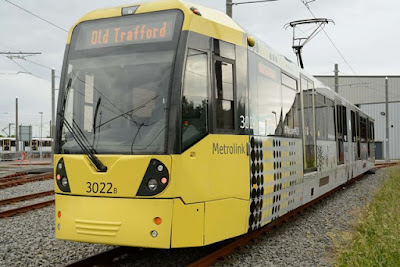 The tram has a design inspired by the worker bee, which has become an iconic Manchester symbol.
The ‘Spirit of Manchester’ tram will run across the network and is expected to carry people travelling to the One Love Manchester charity concert at Old Trafford cricket ground to raise funds for the We Love Manchester Emergency Fund.
Mayor of Greater Manchester, Andy Burnham, said: “The incredible spirit of the people of Manchester has been what has sustained us all since last week.
“Our city has come together and the unity we have shown has made Manchester a beacon of hope around the world. 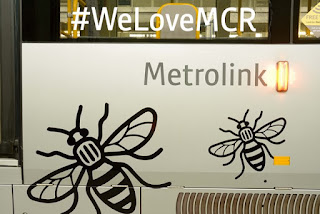 “The Manchester Bee has taken on a new significance over recent days and it is fitting that we display it proudly on the Metrolink as many of us head to what will be a memorable and moving event.”
Councillor Andrew Fender, Chair of the Transport for Greater Manchester (TfGM) Committee said: “Manchester’s unique spirit has been on display for the whole world to see in recent days.
“The kindness, courage, strength and resilience of the local community is no surprise to anyone who knows the city well.
“Metrolink and the Manchester bee are both local icons of our great city and this special tram unites the two, as we stand strong together.”
Metrolink is offering free travel to Emirates Old Trafford for anyone attending the One Love Manchester concert.

Metrolink will be running an enhanced service on Sunday for the concert and a football match at the nearby Old Trafford stadium. Visit www.metrolink.co.uk, call Metrolink Customer Services on 0161 205 2000 or follow @MCRMetrolink on Twitter for live travel updates.