President of the Swiss Confederation Doris Leuthard joined 500 guests at the official roll-out of the first compete EC250 Giruno 250 km/h inter-city trainset at Stadler’s Bussnang plant on May 18. ‘The Giruno sets a new standard, just like Switzerland did with the Gotthard Base Tunnel’, said Leuthard ‘This is something we can truly be proud of.’ 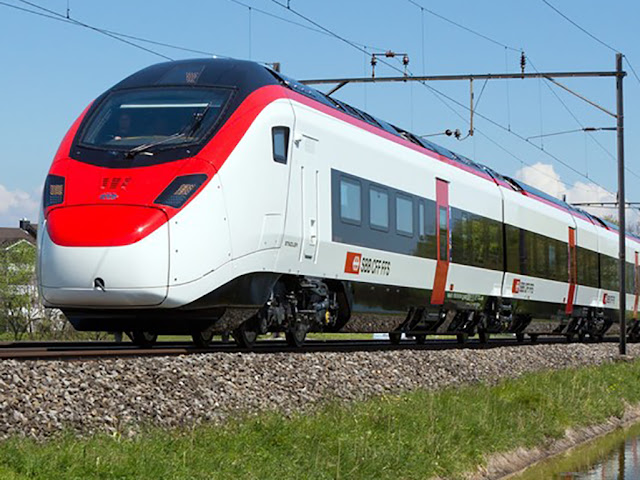 In October 2014 Swiss Federal Railways placed a SFr970m order for 29 of the 11-car articulated trains for use from December 2019 on routes from Milano via the Gotthard Base Tunnel to Basel and Zürich, and later to Frankfurt. There is an option for 92 additional sets. The name Giruno is derived from the Rhaeto-Romansch name for the common buzzard.
Stadler developed the new design in 2½ years, drawing on its Flirt family, and an initial five cars were unveiled at the InnoTrans trade fair in Berlin in September 2016. The Giruno is to be certified in accordance with High Speed TSI and DIN EN 15227 crashworthiness requirements, and the roll-out of the first complete 11-car train marks the start of the complicated process of obtaining approval for use in in Switzerland, Germany, Austria and Italy, which will include testing at Rail Tec Arsenal in Wien.

The Giruno is ‘the first ever mass-produced low-floor high-speed multiple-unit’, Stadler owner and CEO Peter Spuhler said at the roll-out, with stepless entry from 550 mm and 760 mm high platforms. It is also the first train to meet all the requirements of the Swiss BehiG disability discrimination act. ‘The fact that the two project teams were able to develop and manufacture this train in just 30 months is a sensational achievement’, Spuhler said.
The trainset is 202 m long with 117 first and 288 second class seats, multifunctional zones and a bicycle compartment. The interior features bright lighting, a 3G/4G amplifier, power sockets at every seat, large luggage racks and separate toilets for men and women, as well accessible toilets.
Operation through the Gotthard Base Tunnel requires pressure protection and air-conditioning able to cope with the temperatures and humidity, while Stadler said the advanced thermal and acoustic insulation ‘sets new standards’ for long-distance trains.

‘Reliable suppliers such as Stadler are what allow SBB to make use of the strengths of rail travel: simple, fast, traffic-free, personal and with excellent connections to other means of transport’, said SBB CEO Andreas Meyer at the roll-out. ‘Trains like the Giruno are the basis for a modern and competitive rail system. They help us to be more competitive in terms of international transport. In future, the Giruno will be the most comfortable way to travel between Italy and Switzerland.’