"The reality is that the biggest issue facing many of our towns and cities is the crippling and worsening traffic congestion which is plaguing almost every part of the country, damaging mobility in all its forms: the bus network, public transport more generally, as well as all other road users. Growing gridlock - particularly at peak commuter times - is strangling our towns and cities. 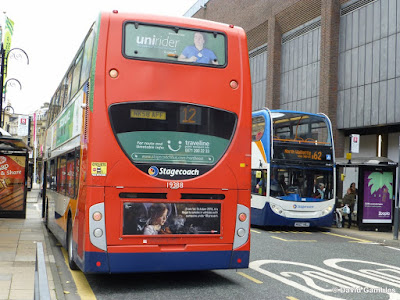 In an independent study by respected transport expert David Begg, this perilous situation was described as a "disease". Average traffic speeds have fallen to below 10mph in Britain’s busiest towns and cities and bus journey times are currently increasing by 10% per decade. If left untreated, the study estimates it will cost an estimated 5,000 jobs per year, bus passenger numbers will drop by between 10% and 14% every 10 years, and the future of the country's bus sector will be under threat.
That is on top of the £13b a year congestion costs the UK economy and the worsening impact it has on air quality, which is already responsible for around 29,000 premature deaths a year across the country.
Statistics issued by the Department for Transport (DfT) earlier this year showed that traffic on Britain's roads reached its highest ever level last year and congestion has continued to rise. Total traffic has increased by 2.2% with van traffic up 6.1% and car traffic up 1.7%.  Separate DfT congestion figures show that average speeds on A roads during the morning peak have fallen for almost four years.
At current rates between now and March 2020, congestion will have wasted around £50b - enough to fund the entire cost of the HS2 high speed rail project that is seen as a crucial part of the drive for the Northern Powerhouse.
Against this toxic environment - where congestion pushes up the cost and damages the reliability and competitiveness of bus travel - as well as a period in which public sector investment in buses is being cut dramatically, it is no wonder that bus use has been impacted.
Mr Begg’s report highlighted the growth in online shopping leading to more delivery vans on the road as partly to blame for the rise in congestion, with the surge in Uber drivers also contributing to a rise in car use.
The situation is set to get worse, with traffic on our roads expected to grow by up to 55% by 2040, and morning and evening ‘rush hour’ periods already lengthening as traffic volumes reach saturation point in cities like London, Manchester and Bristol.
Buses carry more commuters than all other forms of public transport combined and help to generate £64bn per year for local economies, while helping vulnerable people across the country stay connected with their communities. In London, where planned roadworks have increased by 362% in three years, bus speeds on some routes have fallen so dramatically that it is almost quicker to walk than take the bus, according to the independent study, commissioned by sustainable transport group Greener Journeys.
So what’s the answer to the country’s on-going battle with road congestion? Well, buses could themselves hold the answer. If more people travelled by bus, there would be fewer cars on the road, leading to greater reliability of bus services, happier customers and more people turning to public transport.
But this will only work as a solution if our politicians take bold, comprehensive action to tackle the scourge of road congestion that is holding buses back from delivering on their full potential.
It is said in Mr Begg’s report that official targets for average bus speeds and the national introduction of contactless payments by 2019, three years earlier than planned, could help to tackle ease congestion. Other measures to be considered include charging van drivers making deliveries during peak hours; introducing more road schemes such as bus lanes; and encouraging bus companies to provide more up-to-date travel information for passengers, says the report.
The Local Government Association has suggested that Councils should be given more powers to charge utility companies for the time they spend digging up busy roads. It called on the government to grant all councils the power to introduce a daily rate for companies, in an effort to reduce road delays.
It seems logical that the bus, which is the mode of transport that carries the most amount of people using the smallest amount of road space, should be given priority where appropriate. Bus priority measures also offer good value for money to taxpayers too, with research showing that targeted investment in local bus infrastructure and selective priority measures will typically generate £3.32 of net economic benefit for each £1 of cost incurred.
Experience from bus priority schemes around the UK shows that bus lanes can reduce bus travel times by up to seven to nine minutes along a 10 kilometre congested route and also improve their reliability. Previous research has also found that more than a third of car users would use buses more if they were faster.
There appears to be a clear focus on the environmental challenges the country faces as car manufacturers are investing heavily in electric and hybrid vehicles. While these vehicles will continue to assist in tackling climate change, they do not help reduce the number of cars on our roads.
Stagecoach UK Bus Managing Director Robert Montgomery said: “Bus operators across the UK are working incredibly hard to deliver service improvements for customers through brand new vehicles, huge investment in new technology and better customer information but there is one thing that we constantly come up against – reliability issues caused by traffic congestion.
“It is high time our politicians turned their attention to addressing this problem, which is a ball and chain around the ankles of Britain’s bus operators and other road users. Local authorities have the power to do something about this and we would urge them to tackle the problem of road congestion as a priority and help get Britain moving again."