Will modern bus history be repeated in London?

Bendibuses should be brought back into use to improve journey times in London, Sadiq Khan told

Experts have called for bendibuses to be reintroduced in London to cut journey times and improve disabled access on certain routes. The buses were taken off the streets by former Mayor Boris Johnson over concerns they were dangerous and encouraged fare-dodging. But a transport committee has now recommended they should be reintroduced throughout the capital to improve the efficiency and popularity of the bus service. London Assembly’s transport committee suggested they would be better for “express routes” because more people can travel on them and they have improved access for disabled passengers. It acknowledged that the express routes, which have limited stops so buses can travel faster, could be the answer to halting the decline in passengers using the capital’s bus service. Passenger numbers fell by six per cent between 2014/15 and 2016/17, due to increased road congestion and waiting times for customers. In the report published on Thursday, the committee said: “The Mayor has said in his draft Transport Strategy that more express routes may be needed, but stopped short of including any specific proposal to introduce more of them.” 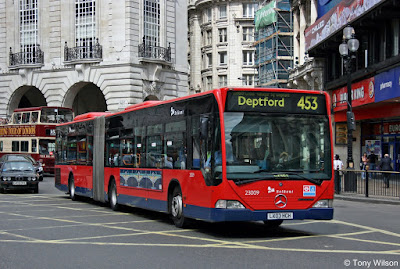 The report adds that bendibuses “might be the best option” because they provide “both a higher capacity and faster loading/unloading than standard double decker vehicles”. The committee pointed out that they also “offer passenger benefits, including more space, faster journeys, and enhanced accessibility for disabled passengers”. The buses were used in London between 2001 and 2011 but were scrapped by Mr Johnson after he labelled them “cumbersome vehicles”. A spokesperson for the Mayor of London said: “There are absolutely no plans to re-introduce bendibuses back to the streets of London.”