Following a successful trial in York, First Leeds has launched its trial of a new fully electric double decker bus.

The “Metrodecker EV” is being trialled by local bus operator First Leeds and will be seen serving the Park & Ride sites at Elland Road and Temple Green. 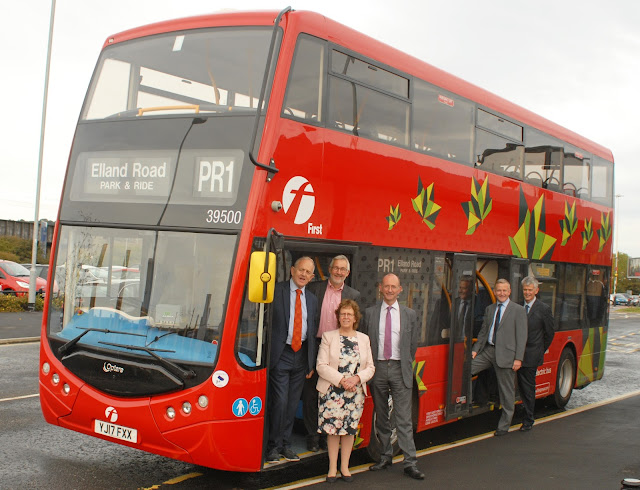 The zero-emission and fully electric bus has the capacity to carry 99 passengers and has a range of nearly 150 miles from one overnight charge. The new vehicle is being trialled as part of First Leeds’s commitment to investing £71m in 284 new ultra-low emissions buses for the city.

Paul Matthews, Managing Director at First Leeds, said: “As one of the major bus operators in Leeds, we understand the vital role we play in working with the Council and West Yorkshire Combined Authority through the Bus 18 initiative, to find solutions to reduce air pollution in the city. Allied to our commitment to invest in 284 new vehicles in Leeds with the latest engine technologies that significantly reduce pollutants, I’m thrilled to welcome the trial of a fully electric double decker bus into the city.”

“We are also committed to monitoring the development of electric vehicle technology, such as we are seeing today and I am pleased that this ground-breaking bus has been developed by a Leeds City Region company, Optare.”

Leader of Leeds City Council Councillor, Judith Blake, said: “As part of our new transport strategy for Leeds we are committed to not only offering the best possible public transport for the city but also doing everything we can to improve our air quality. Working with First Leeds and the other bus operators we are focused on making that happen so this new zero emissions vehicle is just the start with much more to follow.”

Leeds City Council executive member for regeneration, transport and planning, Councillor Richard Lewis, said: “It is very pleasing to see this, locally-built, first fully electric and zero emissions bus being trialled in Leeds and we look forward to seeing it in action on our park and ride services. We know that the future is electric vehicles with no tailpipe emissions; this is the beginning of a revolution in bus travel.”

Optare unveiled its long-awaited zero-emission Metrodecker EV in 2016, and with its range projected to rise to 200 miles on a single charge within a year the manufacturer has signalled a move away from its previous mid-day charging strategy. The vehicle was first trialled last month in York on the city’s successful Park & Ride schemes.

Robert Drewery, Commercial Director, Optare added: “After the success of the Optare electric Metrodecker trial in York I am delighted to see the bus being put through its paces once again in Leeds. The trial in York demonstrated the Metrodecker’s ability to carry out a day’s service without compromising passenger capacity or the need for opportunity charging. These trials are the first of a purpose built electric double deck bus outside London and an important step forward in improving air quality in all our towns and cities. Following the Leeds assessments, the Metrodecker will begin further trials in London.”

This news follows First Leeds’s announcement that it is holding customer consultation events across the city to allow its customers to feedback on the new designs and technologies that will be introduced on its new vehicles over the coming years.