In Queen Victoria Street London a little used entrance can be found to one of the capital's busy railway stations. Part of the Pedway Scheme of the 1960's it is little used.
https://www.youtube.com/watch?v=SumLCpfa_h4&feature=youtu.be 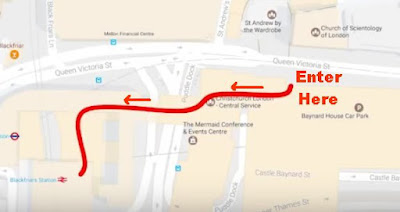 The Pedway Scheme of the 1960's sought to link together the buildings of the Square Mile at first floor level.  Plans were first laid out by architects William Holford and Charles Holden in 1947. By the mid-1960s, the City of London Corporation insisted that any new buildings must incorporate first-floor access points to the growing pedway network. Sadly, the pedway scheme never really succeeded. The concrete bridges crossing the City were underused. Some led nowhere — built as a condition of planning consent, but with no real purpose. Besides, people liked to be at street level, alongside the shops and cafes. 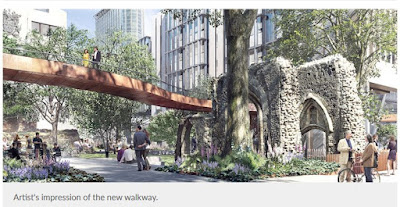 Now there's a new bridge in town that revives the Pedway idea, a steel walkway forms part of the huge London Wall Place development, to the north of the Square Mile.