Twelve Beeching rail lines that campaigners say should be re-opened:


Transport secretary Chris Grayling is facing fresh calls to reverse some of the infamous ‘Beeching’ cuts to Britain’s railways made more than half a century ago.
The Department for Transport recently announced plans to spend a record £48 billion on rail projects between 2019 and 2024.
In a letter to Mr Grayling, the Campaign for Better Transport urged him to set up a new fund to pay for the opening of additional railway lines and stations across the country. 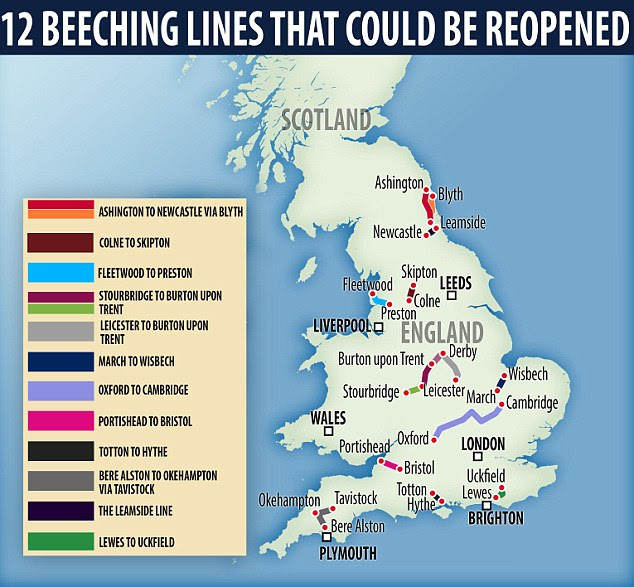 Many local authorities, MPs and communities have already submitted proposals to reinstate rail connections that have been severed since the 1960s.
The letter said that while some of these proposals are ‘based on nostalgia’, many have strong business cases.
It added that new rail connections ‘can unlock plans for new housing and other development, give communities better access to employment, educations and reduce pressure on roads’.
Yesterday one Tory MP campaigning for his local railway to be reopened also questioned why the government is spending ‘more than £100billion’ on HS2, while ignoring demands to reinstate old routes.

Stephen Joseph, chief executive of Campaign for Better Transport who wrote the letter, said: ‘There a huge is demand for new or reinstated rail connections out there, but very few means of making them a reality.
‘We regularly hear from local authorities, developers and communities with very good proposals who have reached a brick wall when it comes to funding.
‘That’s why we’re asking the Transport Secretary to create a new Network Development Fund and help reverse some of the damage done to our railways by Dr Beeching’s hatchet job more than 60 years ago.’
Dr Beeching, the engineer and former chairman of British Railways, was commissioned by the then prime minister Harold MacMillan in the early 1960s to review the railways, which were losing money.

After expanding rapidly during the 19th century, the railways faced increasing competition after the First World War when Britain’s road network expanded and more people started to use cars.
Many sections of the railway were used less frequently, losing money and falling into a state of disrepair.
As a result of his report - The Reshaping of British Railways - around a third of Britain’s 18,000 miles of railway were closed and more than 2,300 stations shut down.
Local residents and politicians have campaigned for more than 200 rail lines and stations to be reopened.
But the Campaign for Better Transport has highlighted 12 projects that it believes are the most viable and would bring the biggest benefits.

The 12 lines axed by Dr Beeching that could be resurrected


Ashington - Blyth - Newcastle: The line remained open to freight after Beeching's cuts, so it would be relatively easy to reinstate passenger trains. New transport connections are needed in the local area.
Portishead - Bristol: More transport capacity is needed for this fast-growing part of Bristol's commuter belt. A station at Portishead is expected to open as part of a wider Bristol Metro network, with completion by 2019.
The Worcester to Derby Main Line Railway between Stourbridge and Burton: Reinstating this route would have both passenger and freight benefits. It would reduce road congestion and remove the need to a bypass.
Leamside line: This would offer Durham’s 60,000 residents an alternative to the busy East Coast mainline and A1 motorway. It would also provide a freight link to the Nissan car plant in Sunderland.
Lewes - Uckfield: Local roads are highly congested, and a new service would offer a diversionary route for the Brighton Main Line.
Skipton - Colne: Restoring 11 miles of track would create an additional trans-Pennine rail route linking the West and East Coast Main Lines.
Leicester - Burton-on-Trent: This would give 100,000 people access to the rial network, reduce pressure on local roads and provide a tourist route through the National Forest.
Fleetwood - Preston: Reopening the six mile line would support economic regeneration in an area of 60,000 people.
Wisbech - March: Wisbech is not on the rail network and its isolated position has contributed to its economic decline.
Totton - Hythe: The growth of many of the towns on this seven mile line, and the resultant pressure on the road network, has created a strong case for reopening.
East-West Rail Link: This would re-establish the rail link between Cambridge and Oxford and improve rail services between East Anglia, Central and Southern England.
Bere Alston - Tavistock - Okehampton: This first stage of this line, linking Tavistock with Plymouth, is already subject to a planning application. A second stage, reopening to Okehampton, would provide an alternative route to Cornwall.
‘This going straight through my constituency without stopping – giving us all the pain and none of the gain.’
The government has said HS2, which will connect London to Birmingham and the north, will cost just under £56billion.
But some experts have suggested the final bill could top £100billion. 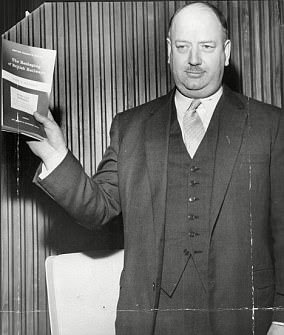 Dr Richard Beeching, Chairman of the British Railways Board holding The Reshaping of British Railways report
British Rail was losing £140m a year when Dr Richard Beeching took over as chairman of the British Transport Commission.
His solution, announced on 27 March 1963, was to 'make railways pay'.
Dr Beeching wrote two reports proposing cuts to British Railway services.
The first was entitled The Reshaping of British Railways and published in 1963. It was based on a survey carried out over one week in April 1961.
A third of the route surveyed carried only one per cent of passenger and freight traffic.
The second report in 1965 was called The Development of the Major Railway Trunk Routes.
The first report suggested that 2,363 stations and 5,000 miles of railway line should be closed - accounting for 55 per cent of stations and 30 per cent of route miles.
The Conservative government welcomed the report, but British people living in rural areas were against the plans.
Following the reports 2,128 stations and more than 67,000 British Rail jobs were cut. More than 4,500 miles of track was lost.