Extra Carriages Being Added to Borders Trains to Tackle Overcrowding

Extra carriages are being added to trains in response to recent complaints about passengers either being turned away or forced to stand in cramped conditions during journeys between Edinburgh and the Borders. 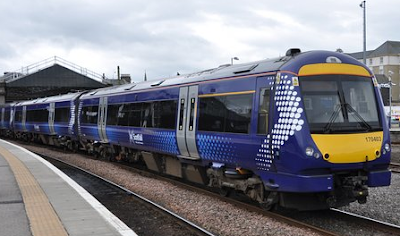 ScotRail has come in for criticism over the last few months for failing to increase passenger capacity at times of high demand.
To tackle that problem, the transport operator is now redeploying British Rail Class 170 diesel trains previously used on the Edinburgh-Falkirk-Glasgow route but now due to be replaced by Class 380 electric trains, increasing the number of seats available.
On weekdays, 21 services on the Edinburgh-Tweedbank line will offer more carriages and seven will have fewer.
On Saturdays, 28 services will have more carriages and three will have fewer.
And on Sundays, three trains will have more carriages and two will have fewer.
Ettrick, Roxburgh and Berwickshire MSP Rachael Hamilton has raised the issue of overcrowding on the 30-mile line with Scottish Government transport minister Humza Yousaf previously, so she is delighted to see progress now being made.
“I am pleased that ScotRail will make a number of improvements to the Borders Railway and help get every passenger a seat.
“It’s reassuring that ScotRail has listened to the criticism and will now work to put on more carriages and increase the number of seats.
“I will continue to keep an eye on the Borders Railway and fight for improvements to the line.”
ScotRail Alliance managing director Alex Hynes said: “The number of carriages on that route has significantly increased.
“This means there are more seats for customers, including during the busiest times.
“The Borders Railway has been a huge success, opening up a wealth of tourism and employment opportunities for the area.
“We are building the best railway Scotland has ever had, and that applies to the whole of Scotland.”
Mr Yousaf added: “Overcrowding tells a story of growth in passenger numbers. Since 2007, our railways have become 33% more popular.
“On top of that, we have increased the amount of rolling stock, including the number of carriages, on our network.
“From 2007 through to our ambitious plans in 2019, 50% more capacity will be added to the network.
“In 2007, 140 carriages were added, and between now and 2019, we will add another 200 carriages.
“We are doing what we can to increase capacity. We will always look for opportunities to increase capacity and add more rolling stock.”
The Campaign for Borders Rail has also welcomed the overall increase in carriages on services on the £350m line, opened in 2015, but is calling for further improvements to follow.
Nick Bethune, its secretary, said: “We welcome moves to increase capacity on the Borders Railway with the introduction of additional coaches on some services.
“We hope that the rollout of the three-coach Class 170 trains can continue as more become available to include all Borders Railway services in the near future.
“Both Alex Hynes and Rachael Hamilton were guests at our annual general meeting in Hawick in October, and it is pleasing to see the dialogue between the two that is producing results.
“Looking to the future, we would like to see a firm commitment to fund capacity improvements over congested tracks on the final approaches to Edinburgh, including doubling the single-track junction at Portobello where Borders trains join the east coast main line.
“Investment in this area will cut delays and lead to a more reliable service for Borderers.”

Focus Comment
The Borders Line has been a tremendous success with passenger numbers far exceeding those forecast. Sadly the line is single track for many miles and it will be difficult to provide double track capacity in the future.
There are distant hopes of extending the line south following the course of the Waverley route but the the line has limited capacity for the thirty miles that has already been re-opened, which will restrict overall capacity for evermore.
Message to those responsible - find a more reliable method of forecasting passenger numbers and don't skimp on the overall finances. Build in future capacity.