Bus company D Jones & Son ‘cease trading’ from Saturday 16th December.
Wrexham Council had been made aware of the situation, with arrangements in place to cover school bus service contracts from today Monday 18th December.
Buses had been the family trade since the late 1960’s, and is most recently known with their familiar blue and white livery. The Acrefair based company ran over 20 vehicles in the Wrexham area.
In a statement Councillor David A Bithell, the Council’s Lead Member for Transport said: “In the last 24 hours Wrexham County Borough Council has received notification that the local bus operator D Jones & Son of Acrefair, Wrexham will cease trading with effect from Sunday 17th December 2017.
“This news has come without any prior warning, and the Council’s immediate priority is to ensure that statutory contracted education transport is provided. Despite the late notice, the Council has been able to secure alternative transport arrangements for entitles students for next week.
“Disruption to local bus services formally operated by D Jones & Son is inevitable. The Council has enacted its contingency plan with a view to securing as many replacement bus services as soon as we possibly can.” 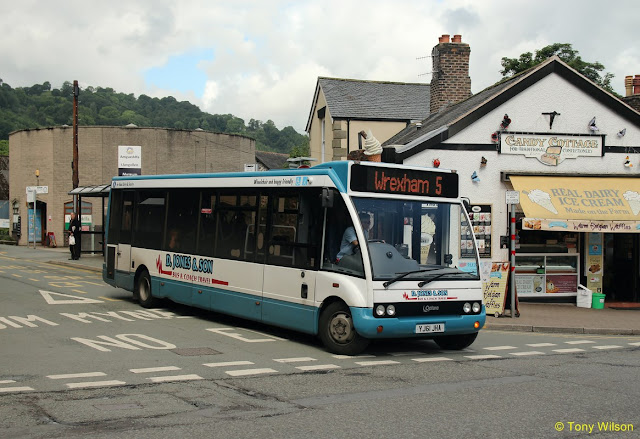 Denbighshire Council also issued a notice informing people of school transport changes, that said: “D Jones & Son, the bus company, has informed us that they will cease trading after last operation on Saturday December 16th, 2017.”
“This affects school and public transport in the Llangollen area. The County Council has made arrangements to cover the school bus from the Chirk & Froncysyllte area to Ysgol Dinas Brân on and from Monday December 18th until the end of term with alternative operator E Jones & Son.”
“Bus services will continue to operate between Llangollen and Wrexham on service 5 (Arriva) and service Traws Cymru T3 (Lloyd’s Coaches).”
“Pupils who catch buses from the Wrexham direction who normally use D Jones service 5/5C are warned that there may be insufficient seats at school times to and from Ysgol Dinas Brân. Arriva services continue to operate every 40 minutes.”
Various routes around Wrexham could be affected including industrial estate and prison routes.