Grand Central to Phase out HST's

Train operator Grand Central is upgrading its fleet of trains running from West Yorkshire to London.
The company’s Class 180 trains operating from Bradford to King’s Cross via Halifax, Brighouse and Mirfield are being refurbished as part of a programme to create a more modern fleet. 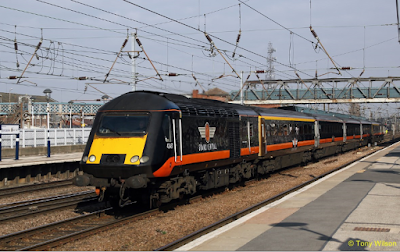 The programme also includes replacing the firm’s fleet of three 40-year-old Class 43 high speed trains (HSTs) currently running on its North Yorkshire route from Sunderland to King’s Cross with Class 180s.
The introduction of the newer Class 180 trains from January, 2018, will bring the North East route into line with the West Yorkshire route.
Grand Central, which is celebrating its 10th anniversary, is also increasing the size of its fleet from eight to 10.
Five of the Class 180s are currently sub-leased to Great Western Railway, but will come into operation for Grand Central during 2018.
The company said having a consistent all-Class 180 fleet would mean greater capacity and more seats where demand is highest with the flexibility to run in a five or 10-carriage formation as well as the option to swap trains around across its two routes.
Grand Central’s Class 180 trains are currently being upgraded as part of an 18-month refurbishment programme. The upgrade includes a new-look interior with new fabric seats with leather edging in standard class, exterior repaint, upgraded catering facilities, new toilet facilities with improved disabled access and LED lighting throughout.
Fleet director Dave Hatfield said: “Our HSTs are well-loved by our customers, colleagues and rail enthusiasts and we’ll be saying a fond farewell to them at the end of this year.
“Coinciding with our 10th anniversary, this is both a landmark and a major milestone in Grand Central’s history. We’re looking forward to 2018 when we can offer a more modern, fully refurbished fleet with greater capacity and flexibility for the benefit of our customers.”
To mark the end of HST operations at Grand Central, a charity rail tour has been organised for Sunday, December 17. It is hoped to raise about £25,000 to be split between the Railway Children charity and Railway Benefit Fund.

Three of the Grand Central HST's will transfer to East Midlands Trains. The ex GC HST's are fitted with MTU engines whereas the current fleet of East Midlands Trains HST's are fitted with VP185 engines. The extra HST's will release class 222 Meridians which will be cascaded within the EMT fleet which in turn will release Class 158's for other duties within EMT.