Passenger trains could soon be running on a disused rail line from Newton Abbot to Heathfield, Devon for the first time in 60 years.
The four mile stretch of line was closed in 1959, and in recent years, use of the line has dwindled to just the occasional freight train.
But the Heath Rail Link have been given permission by Network Rail to lease the line and trains could resume running by 2020.
Network Rail have told the group that providing they can find the funding for the rolling stock and for a park and ride station in Heathfield, they will ensure that the line is in working order for the group.


Michael Cooke, chairman of Heath Rail Link said: “Network Rail have given us permission to open the line and have granted us a long term lease. This is fantastic news for us and everyone who has supported us.
“They will carry on maintaining the line, with some help from us, for the foreseeable future, and with the added option also to buy the line off of Network Rail when everything at our discretion has taken off.
“We are absolutely gobsmacked for words. Now though is the next hard battle to start funding it, running it, and getting business investment. 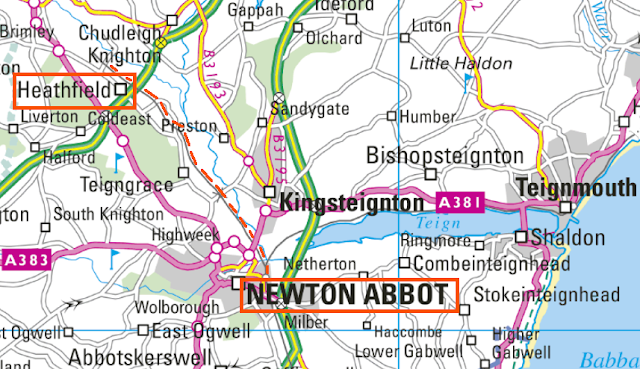 “The line is still in place and it is realistic that services could resume by 2020, providing that we get the funding.”
The group was recently invited to walk the old railway line to see from themselves its condition, and Mr Cooke said there is nothing about the line that would not be repairable.

VIEW GALLERY
He added: “We are unsure as to how much money will be needed, and we will need to purchase the stock, and we are still putting together a business plan, but we think that there is hope that by 2020 passenger trains could be running on the line.”

The group wants to see the line reopened as a way of easing transport pressures in the region as a commuter line, as well as giving the tourist industry a boost.
Mr Cooke added that they are also looking to open up a park and ride system on a field in Heathfield that would mean that commuters could park there and then get the train into Newton Abbot and beyond.
The campaign has gathered support with almost 3,000 people signing a petition backing the proposals – and has also drawn support from South West MEP William Dartmouth, and Newton Abbot MP Anne Marie Morris also supported the plans and said that if a good business case can be made to reopen this line as a tourist attraction, then so much the better.


Cllr Gordon Hook also threw his support behind the plans and said: “I have supported the re-opening to passenger traffic of the Heathfield line since forever.We live in an entirely different world to the 1950s when passenger traffic ceased on this line, and we need to adapt our transport thinking accordingly.
“This line would be a big help towards reducing traffic congestion in and around Newton Abbot if visitors and commuters can be encouraged out of their cars and onto alternative methods of transport.
“It would be a big help in reducing air pollution in Newton Abbot, which is a large and growing problem, responsible for much ill health. It could be used as a park and ride facility for Heathfield, Bovey Tracey and Moorland residents attracted to Newton for work, shopping or leisure activities. Newton Abbot has an ever-increasing ‘offer’ and yet traffic and parking remain a problem. Let’s give people the opportunity to arrive in town without all the hastle associated with car use. I am totally committed to doing all I can to bring passenger trains back to Heathfield.”