Funding will be awarded to 20 local authorities as part of the Clean Bus Technology Fund, which was launched in 2017 and is run by the Joint Air Quality Unit.

To win awards, local authorities had to show evidence that the technology would reduce nitrogen oxide emissions by at least 50%. The buses will be fitted with exhaust gas treatment systems called selective catalytic reduction (SCR) and will be back on the roads after their upgrade. As part of the award, councils must continue to monitor the schemes and provide evidence of their effectiveness.
Speaking at the UK Bus Summit at London’s QEII Centre on 8 February 2018, Transport Minister Nusrat Ghani set out how the money will enable older vehicles to meet minimum emissions standards, and contribute to better air quality.
Speaking at the Bus Summit, Transport Minister Nusrat Ghani said:

Buses and coaches are hugely important to those who rely on them and to the communities in which these people live and work.
Road transport is going to change dramatically over the next couple of decades – and we have to make sure that the bus industry is ready to benefit from those changes.
We have to move away from nose-to-tail car traffic at peak times, endless engine idling, stop-start travel and rising pollution and carbon emissions. Rather than contributing to the problem – buses and coaches very much form part of the solution.

The money will allow councils to retrofit vehicles with technology to reduce tailpipe emissions of nitrogen dioxide, as part of a drive to help ensure that more buses and coaches can contribute to improving air quality in UK cities.

"Poor air quality affects public health, the economy and the environment, which is why we are determined to do more.
I am delighted to see so many high quality applications to the Clean Bus Technology Fund and, as a result, the government has decided to bring forward funding meaning that we will award nearly £40 million to retrofit more than 2,700 buses.
This is another way which the government is delivering on its commitment to improving the environment within a generation and leave it in a better state than we found it."

The Department for Transport will use the Bus Services Act as a way of encouraging councils and bus companies to look at measures to encourage the public to use buses.
In 2016, government invested £30 million through the Low Emission Bus Scheme, which helped put over 300 new low emission buses on the roads, with a further £11 million and 150 buses being announced in 2017. 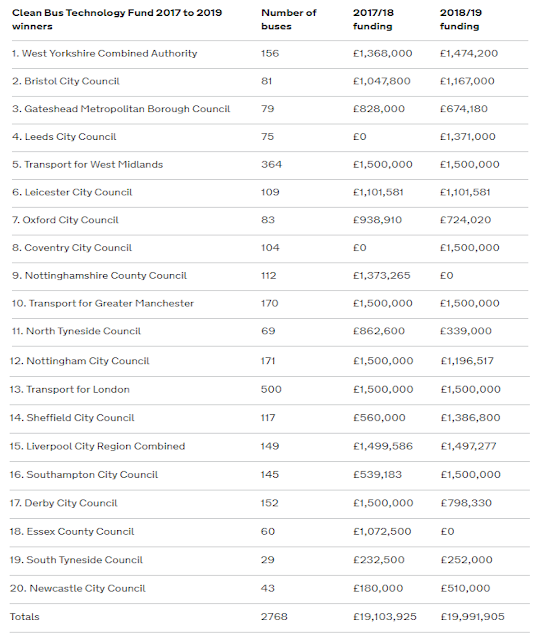