The proposed scheme The proposal is for a new busway using kerb guidance just like the busways in Cambridgeshire and connecting Luton and Dunstable to provide a fast and congestion-free route for buses and coaches from the M1 motorway and the North Circular Road near Staples Corner to Central London at Marylebone Station. You can download the route map from the downloads section on this page.
The proposition is to use the land next to the railway between Marylebone Station and Finchley Road and alongside the Midland Main Line (MML) between West Hampstead and Brent Cross to construct a two-way kerb guided busway.
There will be connections to the local road network at Marylebone to enable buses and coaches to continue their journeys to the West End and the City. One possible addition to the proposed scheme is the creation of a new coach terminal over the railway at or near Marylebone Station.

Rationale for the scheme

The starting point  was the belief that guided bus is a valuable form of high capacity transit that has not yet been exploited to its full potential in the United Kingdom. This high capacity solution will be valuable in creating a route through Central London. The proposed scheme also takes a different approach to the schemes in Cambridge and Luton by using land beside operational railways to accommodate the busway with minimal impact on the operation or capacity of rail passenger services.
The inspiration for the proposed Busway scheme came from New York where the Lincoln Toll Tunnel and the ‘Exclusive Bus Lane’ or ‘XBL’ connects New Jersey with Manhattan. The Lincoln Tunnel feeds buses directly into New York’s Port Authority Bus Terminal on 42nd Street and the XBL caters for around 1,700 buses carrying 62,000 passengers during a typical morning peak period.
The ‘go anywhere’ ability of buses fitted with kerb guide wheels to operate on guided busways and in steered mode on roads gives a high degree of route flexibility. This is best illustrated by reference to the guided busway in Adelaide, Australia where buses from different outer suburbs funnel into the guided busway and where, at the inner city end of the busway, buses are able to take different routes to city centre terminal points.
The expectation is that the substantial time savings that could be achieved by buses and coaches would provide a much more attractive service that would, in turn, attract more patronage and revenue whilst also enabling resource savings by operators. 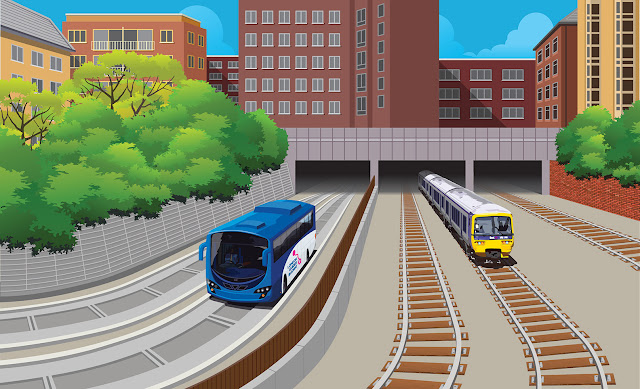 An initial estimate of implementation cost together with an economic appraisal of the scheme has been provided following DfT WebTag guidance as far as is possible at this stage of development of the project. This yielded a benefit/cost ratio indicating that the scheme offers good value for money despite the high cost per route mile reflecting the scale of civil engineering works, the number of structures required, and the complexities of construction work alongside and across busy ‘live’ railways.

The case study has been worked up to a level of detail sufficient to demonstrate that it could be implemented and to enable initial estimates of implementation cost and benefit/cost ratio. The work to date has been funded by one person and that has limited the level of detail provided. It is hoped that the case presented so far will generate sufficient interest for the project to be developed and taken forward to the next stage of development by the public sector. 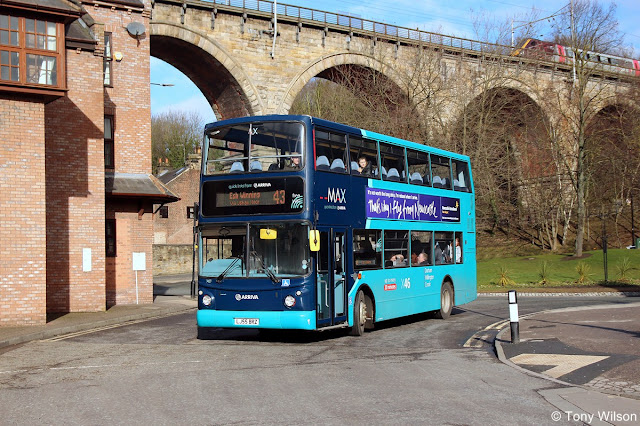 The next album of pictures from the North East is now on the flickr site and focuses upon buses and coaches in Durham City. These can now be viewed by clicking  here