Brussels has moved to make the city’s public transport and bike share system free on the smoggiest days in a bid to drive down pollution levels and meet EU air quality directives.

After two consecutive days of high particulate matter (PM) levels – defined as surpassing an average of 51-70 micrograms per cubic metre of air – buses, trams and metros would have to open their doors completely free, under new city council rules. 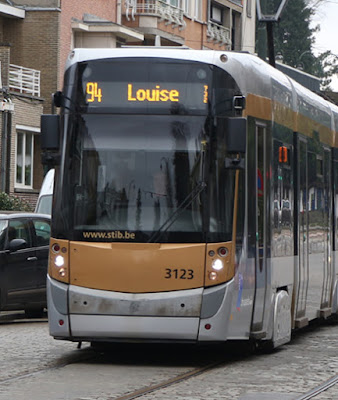 Speed limits for cars would be also cut by about a third and wood burning for stoves would be banned under the law, which was forwarded for judicial review last week.
Officials say they expect it to enter into force by the summer.
Pascal Smet, Brussels’ mobility minister said the measures would redress tax and planning benefits that had benefited the city’s 350,000 daily car commuters over many decades.
“We need to create quality public space, research shows that the more space you give to cars, the more cars you attract. Indeed, the most car-friendly cities are also the most congested. By giving back space to pedestrians and cyclists, cities can create places where people meet and connect.”
The city’s failure to deal with its shifting pall of toxic air had embarrassed EU officials and diplomats who often spluttered their way to meetings where they discussed air quality in the bloc as a whole.
Last month, Brussels moved to address the problem with a strategy of low emissions zones that will progressively ban the most polluting cars from its streets. City buses will all be electrified by 2030.
Meanwhile, city residents will be able to check PM levels on a phone app or a real-time website to see when pollution limits are breached.
These kinds of blue sky actions may be watched closely by officials in London, which reached its legal yearly pollution limit last month. The UK as a whole has been in breach of the EU’s air quality directive since 2010.
Brussels planners are now attempting to create a child and family-friendly city, according to city officials. “The idea is not to ban cars from the city, but to find a new balance,” Smet said.