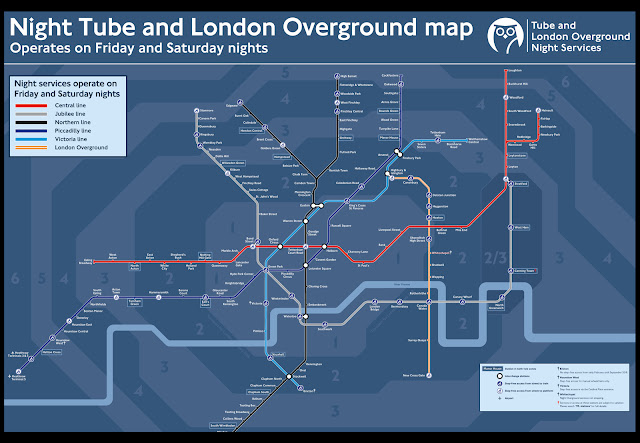 The new service will link up the Overground and Victoria line for the first time easing the journeys of people travelling to north and east London.
Since December last year, the Night Overground has run on Friday and Saturday nights, with 35,000 customers using the service between Dalston Junction and New Cross Gate.

This is understood to be the final amendment to the Night Tube map for the foreseeable future.
In its first year, it has seen more than nine million journeys, cut late night journey times by 20 minutes, created more than 3,600 jobs and contributed more than £170 million to the capital's economy, according to TfL.
Mayor of London Sadiq Khan said: “Following our hugely successful launch of the Night Tube, I’m delighted that we will be able to extend the Night Overground service to help even more Londoners.
“This extension will connect the Night Overground to the Night Tube.
“These night-time services are providing a huge boost to our economy and a safe and reliable way for people to travel across the capital, helping all those working hard during the night or out enjoying everything the capital’s nightlife has to offer.”
Jonathan Fox, TfL’s Director of London Rail and Sponsored Services, said: “The extension of Night Overground to Highbury & Islington will make life easier for thousands more Londoners and visitors, opening up a new late night connection between east and north London and boosting the night time economy.
“It builds on the great success of the Night Overground services we introduced last year, which have already seen more than 35,000 customers.”
The transport authority added that it hopes that the new service will support Islington's nightlife, with the area’s many restaurants, bars, theatres and cinemas expected to benefit.

Christine Lovett, Chief Executive of Angel.London, said: “Angel is home to a thriving night time economy; we have countless restaurants, cafes, bars, cinemas and music venues.
"We are thrilled to hear the Night Overground will link Islington and Angel up to south east and east London. It will provide affordable and safe transport for visitors, residents and staff who work in the local area.”