Tram 11, named after former city council leader Theresa Stewart, has been donated to Birmingham as 13 originals face the possibility of going to the scrapheap.

Thirteen Ansaldo T69 trams from the original Midland Metro fleet have been sold for £12,000 via an e-auction by Transport for West Midlands but two of the 15 vehicles put up for sale have been found new homes and are to be put on display. 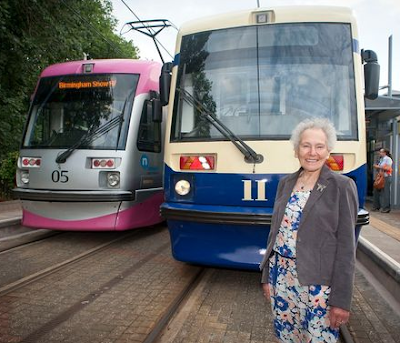 'Tram 7' has been donated to UK Tram, the British tram industry body, while 'Tram 11' has been donated to the city to go on display at a location to be decided.
Tram 11 was repainted in the old Birmingham Corporation colours in 2013 to mark the 60th anniversary of the final tram running in the city.
It is named after Theresa Stewart who was Birmingham City Council's first female leader when she held the post between 1993 and 1999, later becoming Lord Mayor in 2000.
She was a member of the West Midlands Passenger Transport Authority and played a leading role in persuading the government of the early 1990s to give the go-ahead for the Midland Metro line.
Ms Stewart said: "I remember very well the meetings in Parliament and the campaign to get permission to open the Metro so I am glad that one of the original trams is to be kept for posterity.

"They are an important part of the story of public transport in this region.
"When you look at the success of the Midland Metro today, it just shows how the campaign to bring back trams was right.
"It is also rather nice to think that I am going into a museum."
A date for Tram 11 to be moved is yet to be arranged.
The T69 trams were introduced when the Midland Metro line opened between Snow Hill station and Wolverhampton city centre in 1998.
However, they were phased out following the introduction in 2014 of the Urbos 3 trams now in use on the network and have been in storage at a depot in Warwickshire ever since.

Coun Roger Lawrence, lead member for transport with the West Midlands Combined Authority, said: "After many years of service, it's sad the T69 trams are headed for the breaker's yard but in the absence of any buyers for them as a going concern this represents the best return for the council tax payer.
"However, the two trams that are to be preserved will serve as a permanent reminder of the part they played in the story of the Midland Metro."