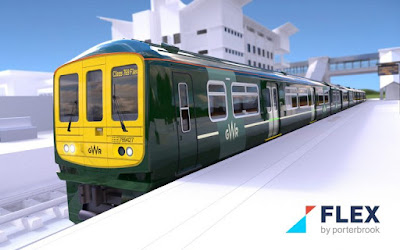 The four-car Class 769 units are to be produced from refurbished Class 319 dual-system EMUs displaced from 769's from Porterbrook
Thameslink services by the delivery of new Siemens Desiro Class 700 EMUs. They will be fitted with two  diesel engines in addition to their existing 750 V DC third rail and 25 kV 50 Hz overhead electric capability, and will be refurbished and equipped with wi-fi, at-seat power sockets, air-cooling, more space for luggage and new seat covers.
Details of where the fleet will operate are to be finalised later this year. GWR said they would initially be used on London and Thames Valley services from spring 2019, enabling the current Turbo DMUs to be redeployed to add capacity in the Bristol area, and also facilitating the deployment of 'refreshed' Bombardier Electrostar EMUs on the Heathrow Express service which GWR is to manage on behalf of Heathrow Airport Ltd.
The Class 769s would then be ‘predominantly’ used on routes between Oxford, Reading and Gatwick Airport, where their trimode capability could be used to its fullest. However, GWR said it would have ‘maximum flexibility to use them in other areas of the network should they be required’.
‘These trains will offer GWR greater operational flexibility with reduced operating costs; at the same time their conversion and upgrade will see skilled engineering jobs secured in the UK supply chain’, said Porterbrook CEO Mary Grant when the deal was announced on April 19.
Northern is planning to operate Class 319 Flex bi-mode trains on the line between Oxenholme and Windermere following the government’s decision not to electrify the route as planned.

The Flex units, which will be re-designated as Class 769s, were planned to be operational on the line from mid 2018. From 2019, Northern will operate new DMUs being built by CAF on the branch line as well.

Class 769 bi-mode trains are also heading to Wales. They have been funded with £1.9m investment from the Welsh government, supported by £1m of extra funding from Arriva Trains Wales.

The new trains mean capacity will be doubled on some of the busiest routes into Cardiff, with an additional 600 seats per day and 1,500 extra seats for the whole of Wales.