Warrington Buses has launched 13 high-specification ADL Enviro200 for its South Warrington services, radically transformed into the Cheshire Cat. The new vehicles were launched with an Alice in Wonderland-themed Mad Hatter’s Tea Party at Golden Square, in the town centre. 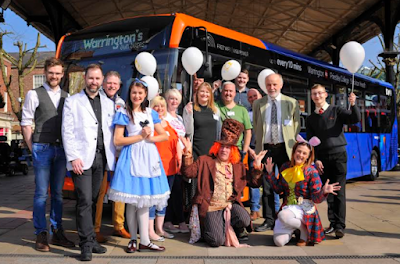 The new Enviro200 buses have Best Impressions designer interiors with comfortable highbacked seats featuring couture-inspired houndstooth pattern moquette. Other features include increased legroom, wood-effect floor and sunroof windows. Passengers are able to pay their fare with cash, contactless or through Apple and Google Pay, and enjoy free wifi and USB charging as well as next stop announcements.
There is also a sofa at the back of the bus! Warrington’s Own Buses has restructured its routes into the southern part of the town, bringing them together under the Cheshire Cat brand. A frequent service with a bus every ten minutes operates to Centre Park hotels and businesses, Priestley College and Stockton Heath, beyond which the routes split to serve different Cheshire destinations including Lymm, Altrincham and Northwich. In addition to Warrington Interchange, which provides access to Warrington Central railway station, all journeys now serve Warrington Bank Quay station to link to intercity trains on the West Coast Main Line. A flat £1 fare applies for journeys between the two stations, further enhancing multimodal connectivity. 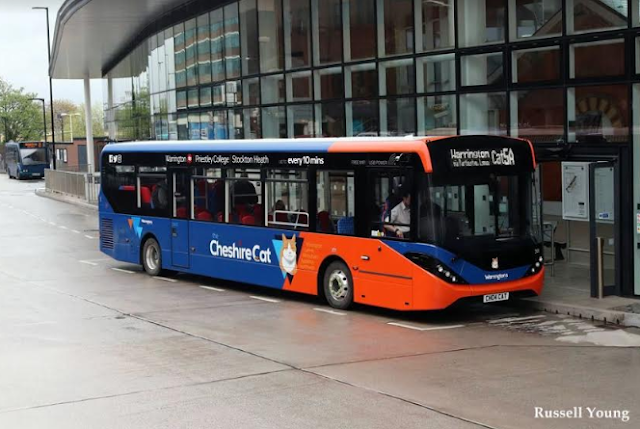 Ben Wakerley, Managing Director of Warrington’s Own Buses, says: “We are making huge improvements to buses in Warrington. The Cheshire Cat follows improvements in the north  of the town, where ‘The Pops’ and hospital high frequency services have been introduced. We’ve frozen our fares for the third year running and also introduced discounts on some routes. Also, we have successfully bid for new contracts in the last 12 months. “Working with ADL and Best Impressions, we have made the Cheshire Cat buses truly amazing, but we haven’t stopped there. Bus stops, shelters and service information is being improved and Warrington Borough Council are being supportive in speeding up journey times too.” 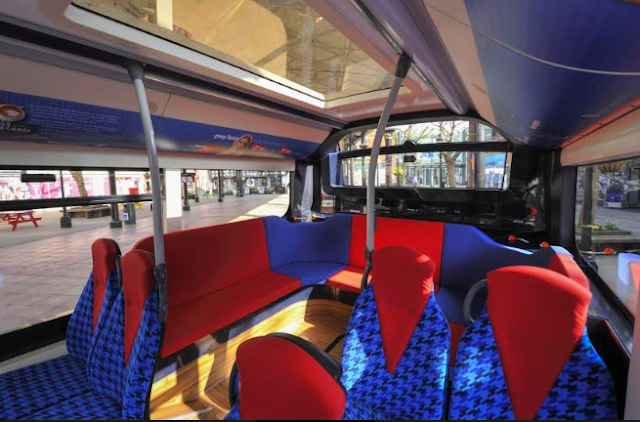 The 11.5m long Enviro200, which are the operator’s first brand new buses in five years, are powered by low emission Euro 6 engines with ADL’s innovative SmartPack efficient diesel technology, which improves fuel efficiency by only charging alternator and compressor when the engine is in coast. 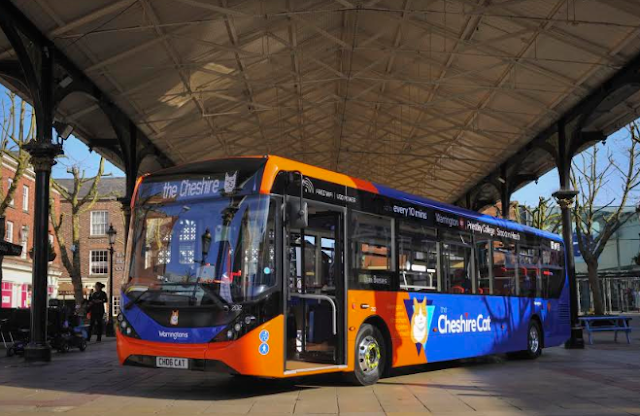 ADL Regional Sales Manager Frank McGhee comments: “With their low emission technology, the new ADL Enviro200 for Warrington’s Own Buses are going to reduce carbon emissions and improve air quality, providing benefits for everyone along their routes. With versatile and stylish designer interiors, plus the added connectivity provided by the new timetable, their passengers will be grinning like the Cheshire Cat that is the new route brand.”