On Sunday 29th April Stagecoach closed their depot at King’s Lynn and in effect withdrew from almost all services in Norfolk. They re-located some of the work to a new base at Long Sutton, over the border in Lincolnshire and now an outstation of Peterborough.
As a result almost all services and routes were taken over by three operators King’s Lynn based Lynx Bus and West Norfolk Community Transport and Sanders Coaches of Holt.
One of the main routes was the ‘Coasthopper’ CH service, which ran all the way along the North Norfolk coast roads from King’s Lynn via Hunstanton, Wells-next-the-Sea and Sheringham to Cromer. 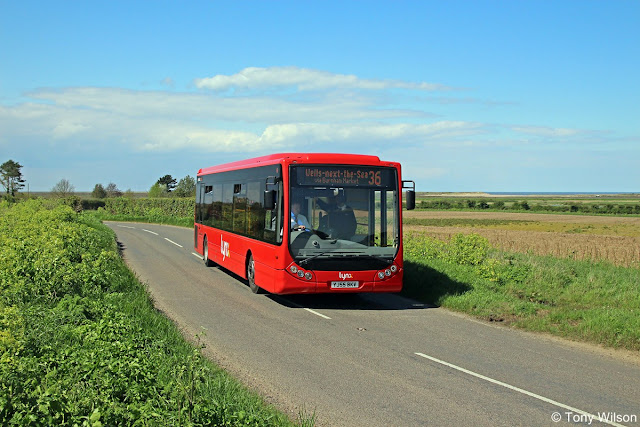 This has now been split at Wells-next-the-Sea, the western section from King’s Lynn run by Lynx Bus in the main with a selection of secondhand Optare Tempo X1200 saloons from various operators. With the route number 36, this is extended inland from Wells via the former Stagecoach route 29 to/from Fakenham. 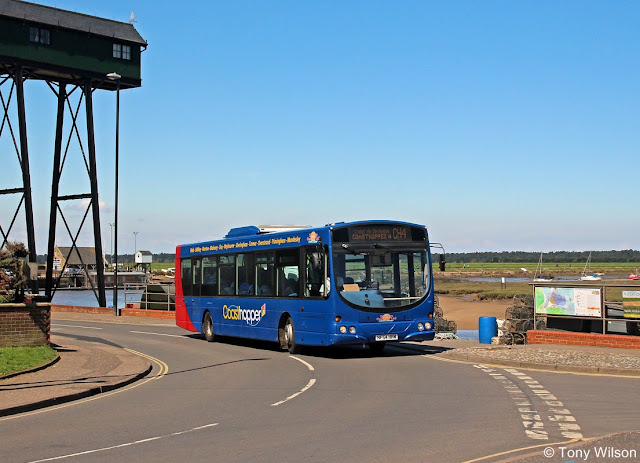 The eastern section from Wells is now in the hands of Sanders Coaches who operate it from their two bases at Holt and North Walsham. For this element the company have acquired twelve former Wilts & Dorset ‘More’ blue and red liveried Volvo B7RLE saloons with Wright Eclipse Urban bodywork. 'Coasthopper' names and full route branding has been applied to these buses and run as ‘CH4’ from Wells to Cromer. Here buses change the blind displays to ‘CH5’ and continue further east over Sanders’ former route 5 via Overstrand and Mundesley to North Walsham.
Joint through ticketing is offered by both operators, passengers able to stay on the same Sanders bus for the ‘CH4’ and ‘CH5’ sections. Thus what better way to take in the great vistas and ‘big skies’ afforded by this part of East Anglia and let the bus take the strain. 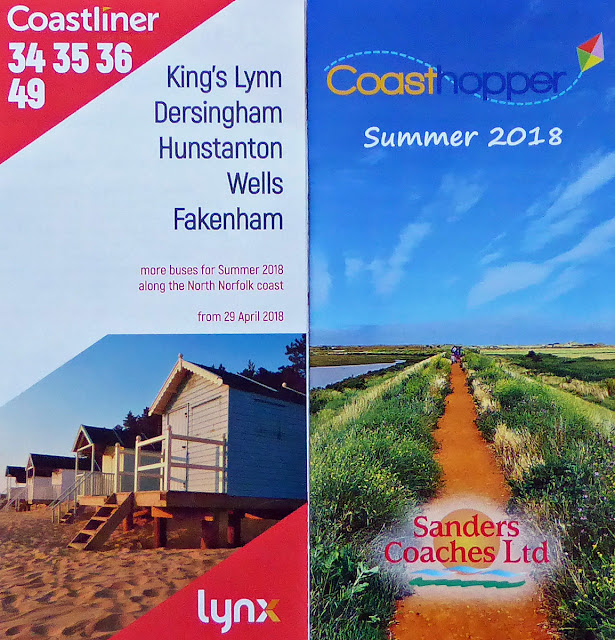 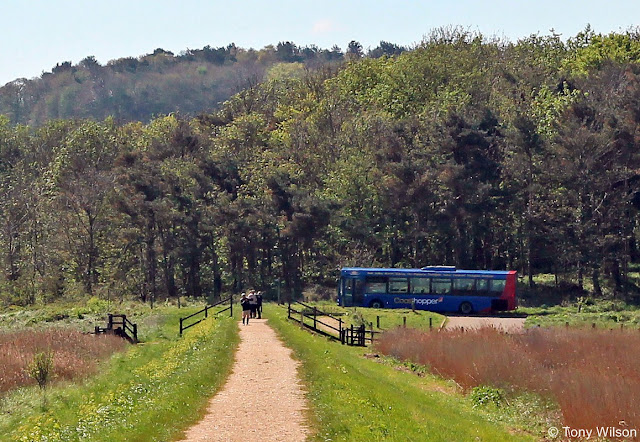 As an addendum, for those who might wish to enjoy the jaunt along the North Norfolk coast roads, how about this for a suggestion. Mind you it does require an early start
Lynx Bus route 36 departs King’s Lynn 0730
Arrives Wells-next-the-Sea, The Quay 0922
Sanders ‘Coasthopper’ CH4 route departs The Quay 0934, through tickets available
Arrives Cromer 1041 stay on the bus and becomes
‘Coasthopper’ CH5 departs 1044
Arrives North Walsham 1131 through tickets end here
Sanders route 6 departs 1210
Arrives Great Yarmouth 1328

This probably kind of replicates the former route 780 operated back in the day by Eastern Counties.
And if staying overnight in Great Yarmouth is not one’s desire, other buses connect direct to Norwich.
However, on the first day of the new services, a preserved NBC Eastern Counties liveried Eastern Coachworks bodied RE, was run along the route. Reg Vardy has kindly provided pictures and copy of the 1983 780 timetable to complement this posting. 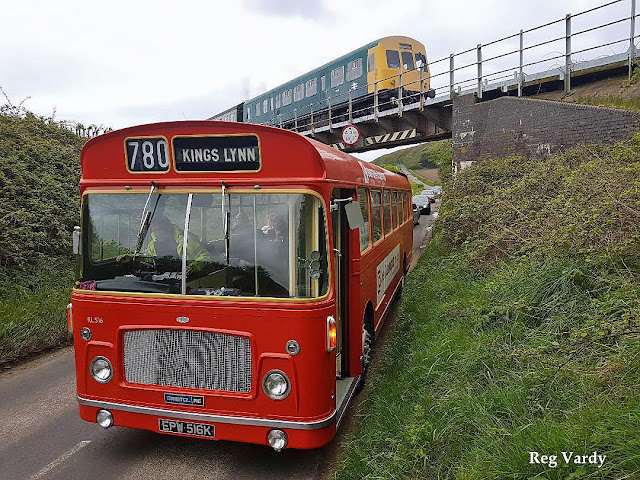 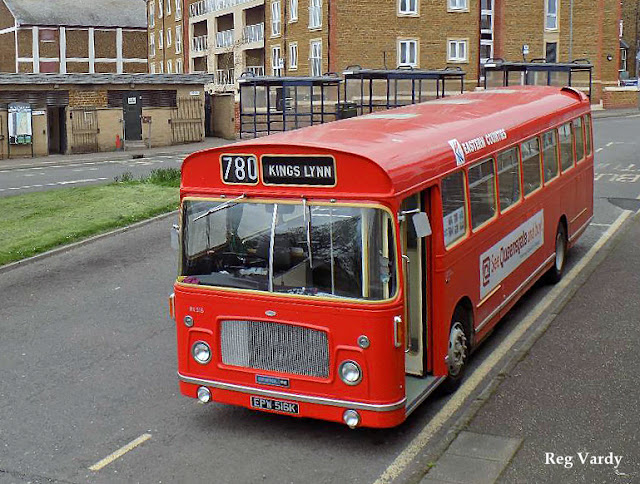 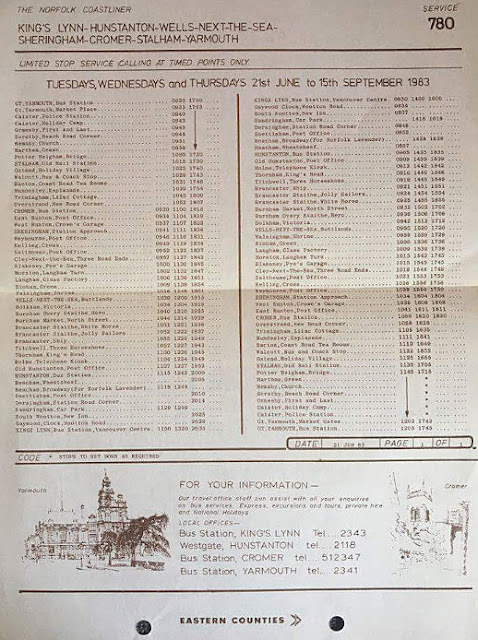 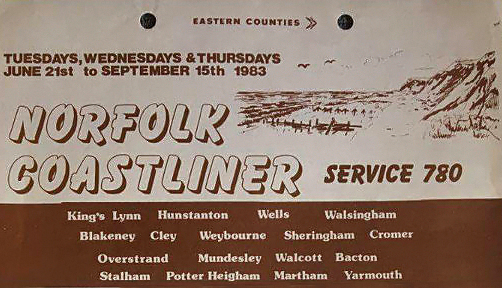 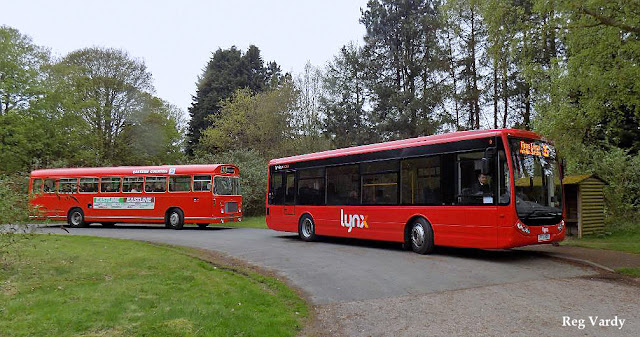 And finally, just as a reminder of the Stagecoach era, a couple of the company's buses used on the previous Coasthopper service, in their bright and colourful dedicated liveries. 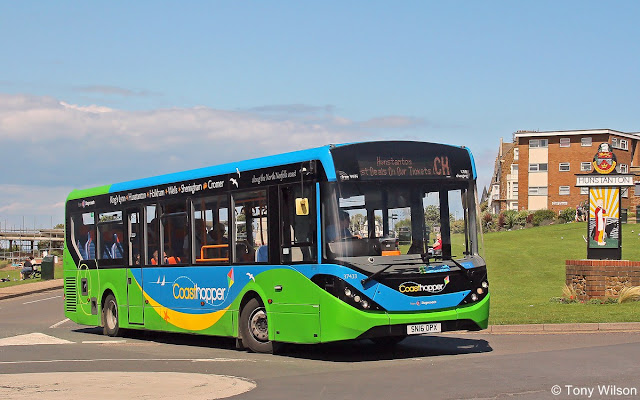 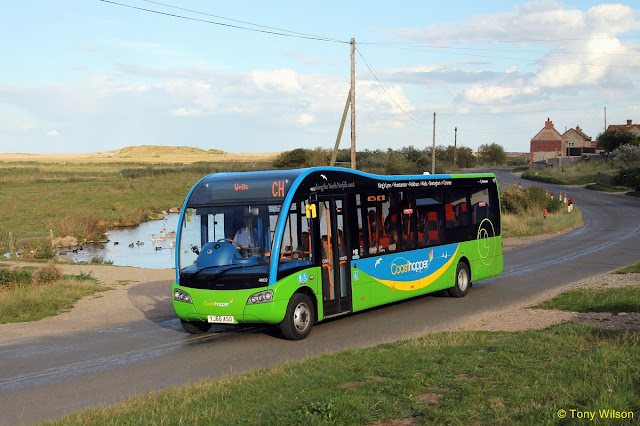