To mark the Royal Regiment of Fusiliers’ 50th anniversary, Go North East has branded a commemorative bus.
The Regiment’s anniversary year goes under the title of Fusilier 50 and to commemorate this major milestone there will be a yearlong programme of events taking place throughout the country in its key recruiting areas, including Newcastle. 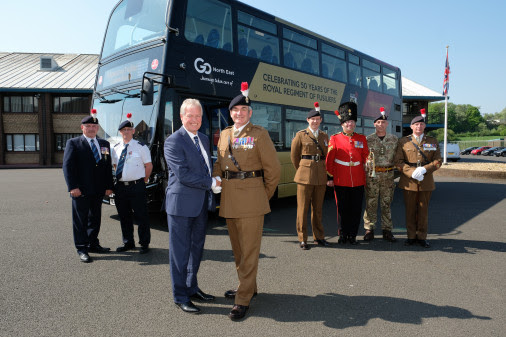 As a bronze partner of the Armed Forces Covenant’s employer recognition scheme with several ex-military personnel within its workforce, including former-Fusiliers, Go North East has branded a vehicle from its fleet, to mark the historic occasion.
A Volvo B5, double decker bus has been wrapped in the regimental colours of rose and primrose on a striking black background and features the Fusilier 50 logo. In service now, the replacement service can be seen transporting passengers across Tyne and Wear.
LieutenantColonel Steve Burton MBE, who recently became Commanding Officer of the Fifth Fusiliers said: “We are delighted to have a dedicated branded bus for the Regiment in this, our 50th anniversary year. The North East is a key recruiting area for the regiment and where our reservists the Fifth Fusiliers are based so it’s an honour to have this major milestone recognised in this way. A huge thank you to all
The team at Go North East for their support for the Regiment and we all look forward to seeing our bus in service throughout 2018.”
Kevin Carr, Managing Director of Go North East added: “We take our role in the community very seriously and are always looking at ways to be involved with initiatives which not only have regional importance but that our customers and team members are passionate about too.
“That’s why we were so keen to celebrate the Fusilier’s 50th anniversary as several of our team members previously worked in the military, including a number of former Fusiliers. We’re glad we can help promote the occasion in this way and show our continued support to current and ex-service men and women in the North East.”
With a regional workforce of over 2000 local people, Go North East has been successful in actively recruiting new drivers and engineers who held previous roles in the military.
Former 1st Battalion Fusilier, Michael Sparkes has been a bus driver at Go North East’s flagship Riverside depot in Gateshead, since 2009.
With 23-years served in the Army, joining at 16 and hanging up his boots aged 40, Michael has the British Forces in his blood. He said: “My dad was a Paratrooper, my brother was also in the Fusiliers and now my son is joining the Military Police. Being in the Fusiliers is like having an extended family, there’s always someone for you to help, or someone to support you and that’s what’s also great about working at Go North East.
“Looking for a new job was hard. Most companies wanted at least two years’ experience and after working away for so long, including two tours in Iraq, I wanted to be home in the North East. The funny thing is, when I applied for the driver role, I had every driving qualification available, except for a bus!”
Now, with almost a decade spent on the frontline of Go North East’s regionwide services, Michael is grateful to have a job that offers security and a strong team culture. He added: “As a Fusilier, I trained recruits, served in Northern Ireland, Bosnia, Kosovo – always under fire, and I miss the action, but with Go North East I’m grateful to have a job for life.”
Receiving a Long Service Award from Go North East this year, in recognition of three decades dedicated to the job, bus driver Stephen Lowery joined the company immediately after leaving the 3rdFusiliers in 1987.
The 61-year-old, who lives in Blyth with his partner, recalls being eager to follow in the footsteps of his older brothers, beginning his Army career aged 17. He said: “I remember my brothers serving in Northern Ireland, but I wasn’t old enough to join the conflict - you had to be 18. I saw my fair share of action later - helping tourists during the invasion of Cyprus, three tours of Northern Ireland, and a four-year posting in Germany. Some of the best years of my life were spent in the Fusiliers with getting married, and the comradeship. I’m still great friends with a few of the lads.”
Based at Go North East’s Percy Main depot, Stephen has seen a lot of change in the bus industry over the past 30 years, but still believes the role is a great option for veterans. He finished: “Go North East is a good local employer and as a driver, you can be part of a team but still have independence. If that’s what you like and are used to being out and about, it’s ideal.”
The Royal Regiment of Fusiliers, known as ‘The Fusiliers’, is an English infantry Regiment in the British Army, formed from four historic Fusilier Regiments in 1968. Since then, the Fusiliers have seen service across the world in Northern Ireland, Cyprus, the Balkans, the 1st and 2nd Gulf Wars and Afghanistan. The Regiment has two battalions – First Fusiliers in Tidworth and Fifth Fusiliers in Newcastle – and both adapt readily to challenging scenarios. 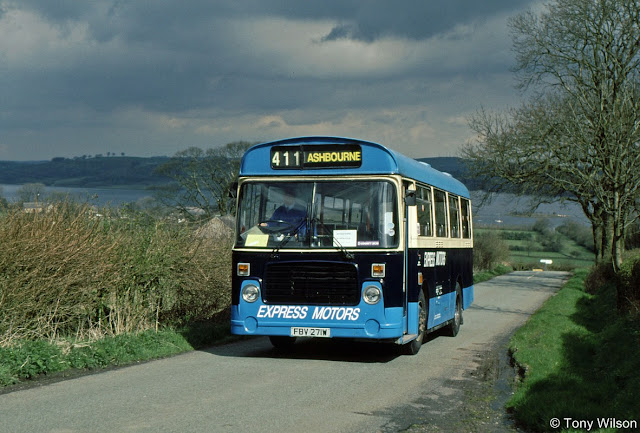 It's another set of mini and midi buses that we focus our sights upon a regiment of colour, these being the fourth set from the UK provinces. Now in an album they can be viewed by clicking  here